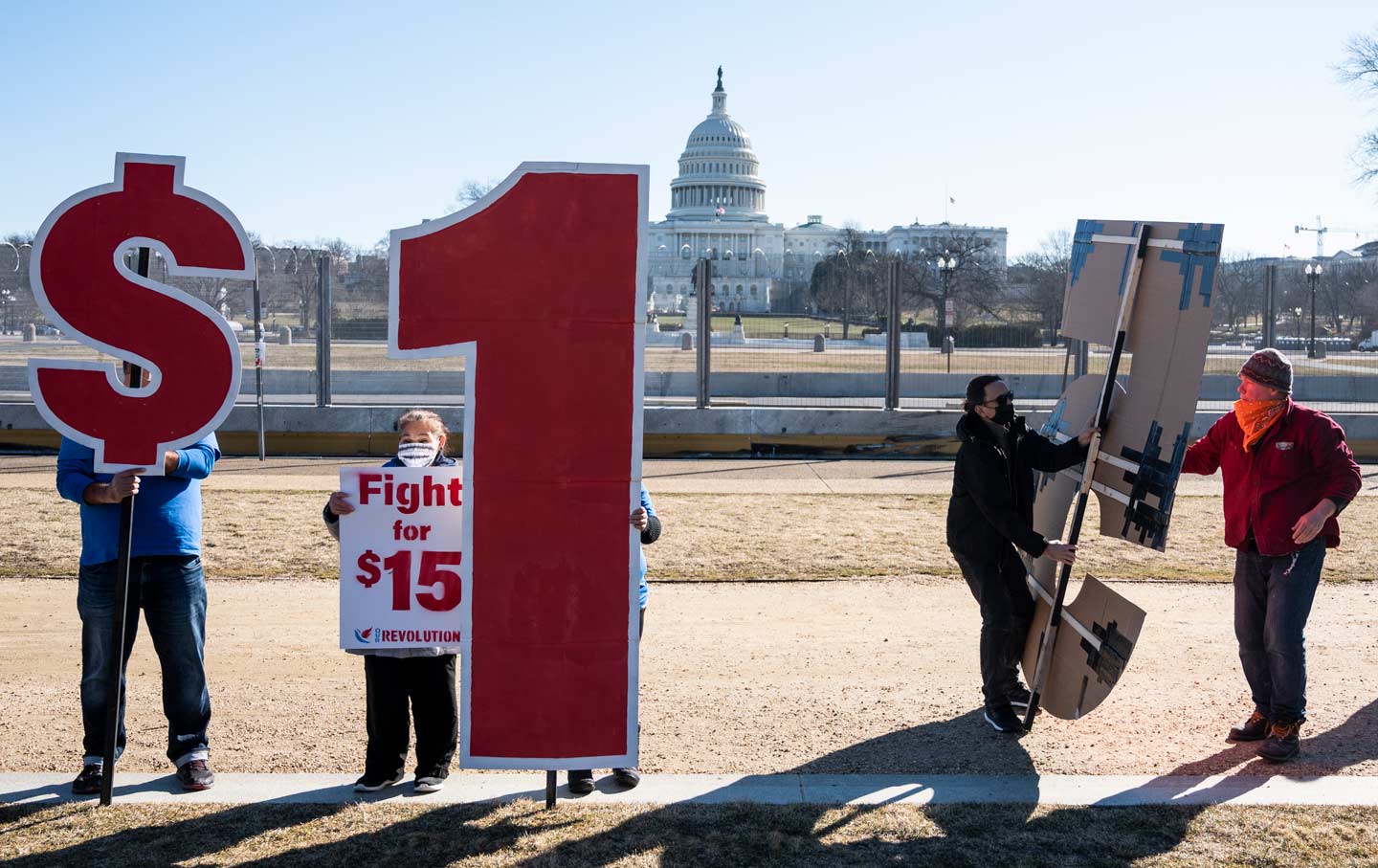 Economist Dean Baker reminds us that for the first 40 years after President Franklin Roosevelt signed the Fair Labor Standards Act in 1938, the national minimum wage “not only kept pace with inflation, it rose in step with productivity growth.”

This progress did not deliver the cooperative commonwealth that progressives hoped to achieve. But it was on an economically, morally, and politically sound trajectory.

Unfortunately, it did not continue.

Since 1968, Baker explained last year, the minimum wage has not even kept pace with inflation. In fact, while there has been progress at the municipal and state levels of government, the federal minimum wage has not increased by a single penny in the past 14 years—since 2017, when it reached $7.25 an hour.

So if we’re talking about what a new Democratic administration might set as a reasonable baseline wage for American workers, it’s somewhere in the range of $25 an hour.

Biden hasn’t gone there. He has started with a modest proposal to raise the wage to $15 an hour in stages between now and 2025. This is the definition of incremental progress. “$15 an hour—and by the way, it’s over a four-year period—is not a radical idea,” says Senate Budget Committee Chair Bernie Sanders (I-Vt.). “If you make $15 bucks an hour, you are not getting rich. But at least, at least, you have a shot to live with a minimum of dignity. You don’t have to have all the stress and pressure that’s on you right now trying to survive on starvation wages.”

What the Senate Can Do

The slow march to $15 an hour, as outlined in the American Recovery Act, was always a compromise. And now, the compromise has been imperiled by the Senate parliamentarian’s decision that it is unacceptable to use the budget reconciliation process to set a $15-an-hour standard as part of Biden’s $1.9 trillion

The parliamentarian’s ruling can’t be the end of this fight.

The party of FDR must recognize the calculus that Congressional Progressive Caucus chair Pramila Jayapal spells out when she says, “We made a promise to raise the minimum wage and we now have to deliver on that promise to 27 million Americans who are not going to be much convinced when we go back in two years and say, ‘Sorry, the unelected parliamentarian told us we couldn’t raise the minimum wage.’”

Japayal and her caucus colleagues got Speaker Nancy Pelosi (D-Calif.) and the House Democratic Caucus to back a version of the ARA that keeps the $15 proposal in the package. She’s now urging Senate Democrats to be just as bold, as is Minnesota Democrat Ilhan Omar, whose no-excuses response to the parliamentarian’s ruling was: “Abolish the filibuster. Replace the parliamentarian. What’s a Democratic majority if we can’t pass our priority bills? This is unacceptable.”

On Monday, Omar and Jayapal joined 20 other House Democrats in signing on to a letter to the administration written by California Democrat Ro Khanna, which urged the Senate’s presiding officer—Vice President Kamala Harris—to “refute the parliamentarian’s advice” and keep the 2020 Democratic platform’s “fight for $15” promise.

That’s good advice. It is unacceptable to compromise of something that is so necessary, and so popular, as the fight for $15.

Unfortunately, Omar’s clarity has not been echoed in the White House response, or that of most Senate Democrats. On Monday, White House Press Secretary Jen Psaki said the president was “absolutely committed” to the $15-an-hour wage hike. Yet when she was asked whether Harris would overrule the parliamentarian, Psaki said, “That’s not an action we intend to take.”

So what is the strategy? “We don’t have a clear answer on what that looks like at this point,” she said. “It just remains a commitment and something he will use his political capital to get done.”

That’s a profoundly unsatisfying answer because it suggests a stalemate that is all but certain to lead to talk of compromising for a smaller minimum-wage increase.

What’s frustrating about the administration’s response is that the Senate has plenty of options:

Even if Options 1 and 2 really are off the table, Biden should be talking about what he plans to do next. There has to clarity on moving forward. That clarity must be rooted in an understanding that the fight against poverty wages won’t be won if the White House and Senate Democratic leaders show any sign of flexibility when it comes to the $15 figure.

When “compromises” are suggested, Biden must explain that $15 an hour is the compromise.

This has to be the administration’s bottom line as Republican senators and Democrats such as West Virginia’s Joe Manchin and Arizona’s Krysten Sinema object that the $15-an-hour standard is too generous, even if it is implemented on an agonizingly slow timeline.

Recognizing that Americans are enthusiastic about raising wages, the Ebenezer Scrooges of the Senate are already proposing their “alternatives.”

Manchin is only slightly more generous; he’s proposing a federal minimum of $11 an hour. That doesn’t even provide a living wage for his own constituents.

How should Biden respond? Not with negotiations but by seizing the bully pulpit and making the moral, economic, and political case for the rapid adoption of a $15-an-hour wage.

That shouldn’t be hard. The voters have already signaled that they want to go big.

In Florida, on the same day that Biden lost to Donald Trump, a $15-an-hour proposal won 61 percent of the vote. In states across the country, red and blue, the fight for $15 won popular support. New national polling commissioned by the National Employment Law Project, which surveyed 2020 general election voters in the nation’s 67 most competitive congressional districts, has found:

Fully 62% of those polled, including 59 percent in the districts won by Republicans, favored raising the federal minimum wage to $15 by 2025. These results reinforce the success of the Black-and-brown-worker-led Fight for $15 movement and the desperate need for at least a $15 minimum wage across the country, while demonstrating that this is a bi-partisan issue and one on which Congress should take immediate action.

Democrats Have to Put Money in People’s Pockets

Biden should certainly do his best to convince Manchin and Sinema that this is the right time to do the right thing. If that does not work, however, he can go over their heads—to the American people in general, and to the people of West Virginia and Arizona in particular.

His argument should be a partisan one. You read that right: partisan. The president needs to recognize that, despite everything that Trump’s Republican Party has done to discredit itself, the Democrats are now in a perilous position. “What history has told us is that two years after President Obama won the presidency in 2008 and two years after President Clinton won in 1992, Republicans did phenomenally well. And the reason they did so well was because Democrats had the power, and they did not exercise that power to help working families,” says Sanders. “We cannot make that mistake again.”

Biden needs to define the Democratic Party as a political organization that recognizes the immorality of paying full-time workers so little that they are stuck in poverty. And he needs to do so quickly.

“We don’t have a lot of time here,” says Jayapal. “The midterms are in two years. We need to show people that their lives are appreciably better, that we can get control of the virus and we can put money in people’s pockets.”

As Jayapal says, “We simply cannot go back to the Black, Brown, AAPI, Indigenous, poor and working class voters who delivered us the White House and the Senate majority and tell them that an unelected parliamentarian advised us—based on arcane rules—that we could not raise the minimum wage as we promised.”

Reckoning With a Year of Shared Isolation, Pandemic, and Protest

France's former president Nicolas Sarkozy said Tuesday that he might consider taking his appeal against a corruption conviction to the European Court of...
View Post

Planning is crucial if you want a memorable vacation. Planning allows you to relax while you hit the road. Moreover, planning a...
View Post