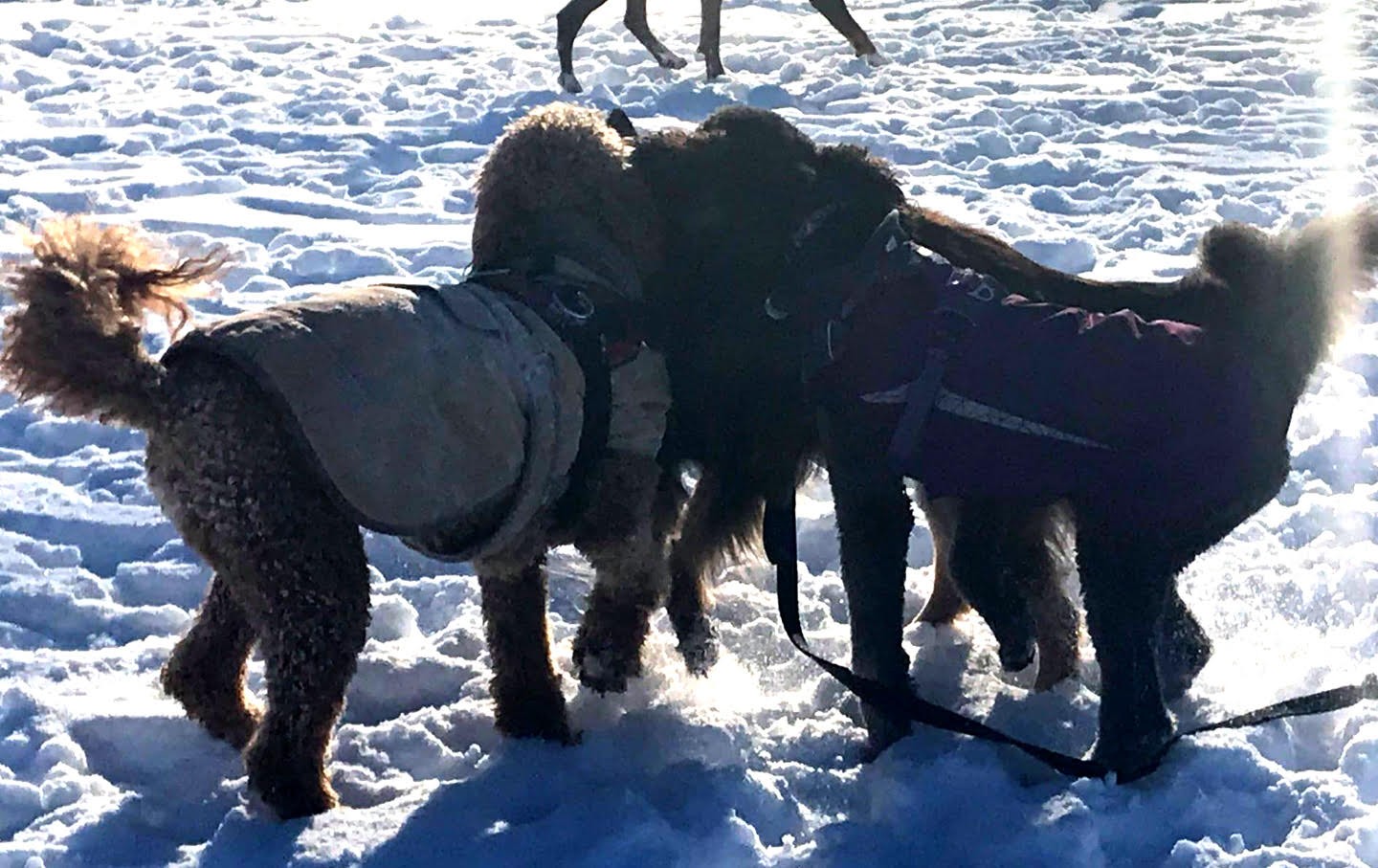 Newton, Mass.—During lockdown last March, one of the few approved excuses for being outside was to walk your dog. In Newton, a suburb outside of Boston, stir-crazy folks with the requisite pet in tow began congregating, six feet apart, at Braceland, one of our local parks.

We were educators, health care workers, and nonprofit executives; musicians, engineers, and entrepreneurs—alongside a mix of designer doodles and rescues. There was early talk that the rescues all came from Southern states, where yahoos are dumping pups in garbage bags by the roadside on the regular, so say the shelters. I find the narrative suspect, serving to feed my Northeastern neighbors’ sense of regional superiority, but then again I’m a Texan, with a Standard Poodle, Zuri, and a superiority complex of my own.

At first, we knew the dogs’ names better than one another’s. We knitted neighborly bonds with small talk. Once a week, at least one person would declare that the inventor of the Chuck-it Launcher should receive a Nobel Prize. The rod’s aerodynamic curves and cup allow you to throw a tennis ball like Tom Brady, tiring out young pups and cutting stupefying rounds of fetch in half. We had running jokes. The dad of two Shih Tzus would ask, “How’s Father Leahy?”, the president of the college where I teach, who frequents his Brookline shop. I wouldn’t know, and the Shih Tzus’s dad really didn’t care; the query was more about the two of us, connecting. In time we all started sharing tips about the neighborhood, passing on recommendations for good repairmen—our exchanges like the Nextdoor app come to life, but without the casual racism. Out from behind the anonymity of screens, people have to face one another and actually think about their words.

Eventually, the oak trees overlooking a long field sloping toward the Charles River became an office watercooler of sorts, where we talked politics and the pandemic while watching the dogs play. Like barking, though, mindless banter can turn edgy if you miss the cues. There were some tense moments as job loss and quarantine and boredom wore on us.

When stock markets initially tanked, would-be titans of enterprise parroted maxims about buying low, selling high. “That’s how you build wealth,” touted a salesman, owner of a gorgeous young Vizsla, invoking Warren Buffet as a liberal shield. A nonprofit executive and an entrepreneur agreed. They were trying not to sound crass, like capitalists preying on disaster. I walked away to renew a round of fetch with Zuri.

Around the election, the regular “How’s Father Leahy?” turned into an incredulous “You’re voting for Biden? He’s so old.” A retort I didn’t even know I had ready landed hard and on target: “Well, he’s not a white supremacist.” We both stood silent, stunned, and turned on our heels.

Mostly, though, the only irreparable breaches have been disagreements over whose dog started it. Now that handshakes and hugs are out, the need to be held in community keeps bringing us back, even if at a distance. On the occasional weekend, when weather permits, our resident “mayor” organizes “yappy hours,” featuring Milk-Bones for the pups and festive drinks for the humans. There was spiced apple cider at Halloween and a sweet peach tea to celebrate the Georgia Senate races. One sunny Saturday last fall, a retired principal wrote a funny ballad in honor of our accidental community, accompanying himself on acoustic guitar:

Elvis had Graceland
But we’ve all got Braceland
If we want, we can stay here past dark
Because it’s Yappy Hour here at the park.

As the days of the pandemic lengthened, with less travel and day-to-day business, the skies cleared and wildlife came out. We did too. Neighbors came to rely on one another in a pinch as neighbors do: dog-sitting for a few hours or a weekend; sharing hand-me-downs for new pups; celebrating milestone birthdays with cupcakes and banners. From such neighborliness real friendships grew. For Zuri and me, a standing playdate at the park with a couple and their two Standards led to other get-togethers as we discovered affinities beyond poodles. On our group chat, the common thread among all the cute dog pics is gratitude for the community we’ve built to keep each other sane through constant uncertainty. “The silver lining,” we say.

It’s been almost a year. Wildlife is back in hiding; smog in New Delhi and Los Angeles has returned; yet, we still gather. A few streets surrounding Braceland are named after states: Ohio Avenue, Indiana Terrace. On the night of the inauguration, we met at the white house at the end of Pennsylvania Avenue, letting the serendipitous address speak of our hopes for us and the nation. Our resident mayor embraced Biden’s theme of unity, serving champagne with grenadine or cassis to spike it red or blue.

The Vizsla’s dad, who was laid off and then rehired at a much lower salary, says the pandemic has changed his mind about a lot. Perhaps “building wealth” sounded more like a scam after losing his job. Following the January 6 insurrection, he asked if I thought Trump supporters would have a change of heart having seen the violence. I doubt it. I think it’s more like the Shih Tzus’s dad. He does work harder now to make small talk, to connect, but he persists in showing up without a mask despite a statewide mandate. Standing on the hill by the oak trees, he wishes “Good morning” to the rest of us, masked, standing below. He seems to want to show us that he’s not like those people who stormed the Capitol.

Scenes From a Pandemic is a collaboration between The Nation and Kopkind, a living memorial to radical journalist Andrew Kopkind, who from 1982–94 was the magazine’s chief political writer and analyst. This series of dispatches from Kopkind’s far-flung network of participants, advisers, guests, and friends is edited by Nation contributor and Kopkind program director JoAnn Wypijewski, and appears weekly on thenation.com and kopkind.org.