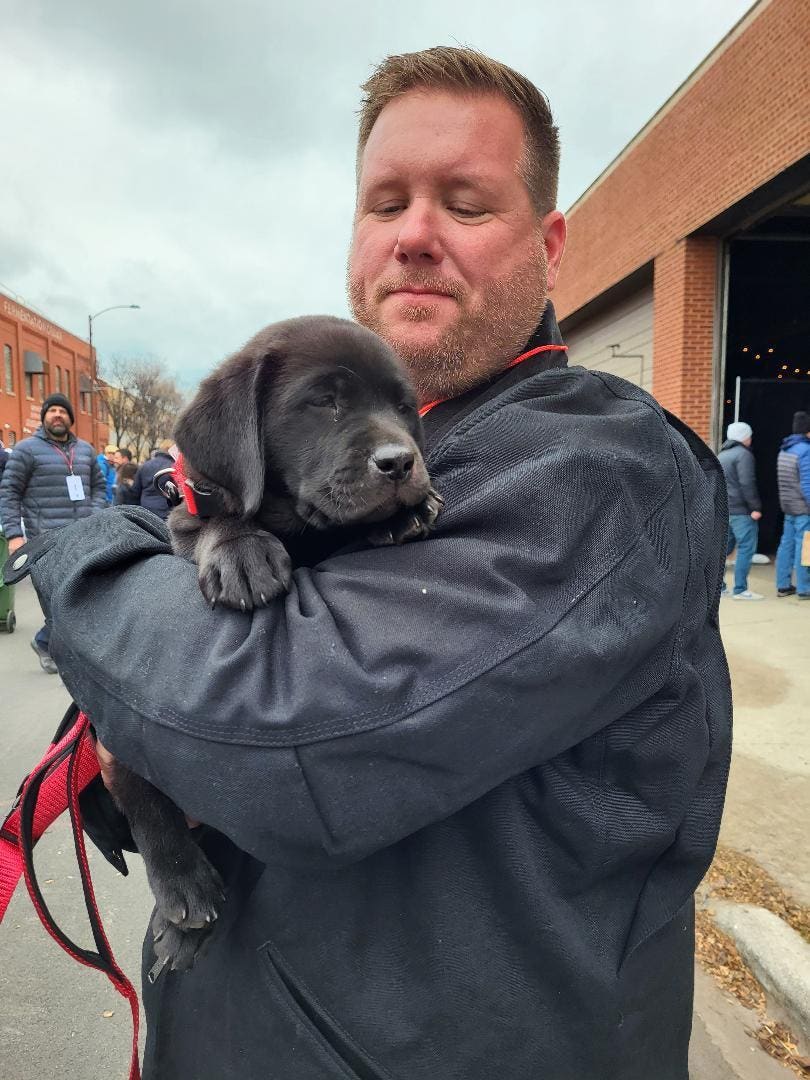 Though Chicago’s first snow flurries were in the air, the feelings were all warm and fuzzy at Goose Island Beer Company’s seventh annual Prop Day.

The holiday – and it truly is a holiday for beer lovers – was back to being celebrated in person Saturday after a two-year hiatus due to the pandemic.

Besides the beers that were being sampled, a few of Goose Island’s partners were giving out free samples of coffee, sausage and even chili. Paulina Market was giving out free samples of beef sausage sticks, selling them and bacon that had been marinated with the stout. “We made 2,500 pounds of bacon and 800 pounds of salami sticks, and we’re going to sell out of sticks,” says Sal Sierra, sausage maker. “The line’s been 10 and 15 people deep the whole day.”

The fans who attended the street party had to win a lottery to gain entrance to the event, and people from around the country and even the globe flocked to Fulton Street in Chicago. Nicole Rojas flew in that morning from Boston and her plus-one, Paulo Silva, flew in from New York.

“We’re flying back tonight,” says Rojas. “It was 70 degrees this morning when I flew out of Boston. We’re flying out tonight.”

They also offered tastings of a mystery stout, and perhaps the biggest attraction was “The Vintage Surprise Machine.” People queued for at least half a city block to pay $10 to put a giant token in to the “machine” to get a bottle of a vintage variant from past stout lineups. Some of the variants in the machine would sell for upwards of $200 on the secondary market to beer fans.

Rojas says that they were gifted by another fan, who took a turn at the machine, with an earl gray tea variant, which they were really excited about trying. “It’s a little bit like gambling, and a little bit like drinking, and it puts your vices all together in one package to have fun,”Silva says.

Unofficially, the next most popular attraction was Brody, a Labrador retriever puppy, who was being carried around in a Prop Day blanket by his owner, Billy Umphrey, a native Chicagoan.

“This is my fourth Prop Day,” Humphrey says. “I used to be the guy who walked around with scuba gear to give out beer. So far, I’ve had the reserve and the 30th anniversary, which is delightful.”

Greg Hall, who created the stout back in 1992 and who now is the owner of Virtue Cider, comes back every year for stout events, and his favorite is the 30th anniversary. “Every sip tastes different, spicy and chocolatey and malty and wood and barrel, which is different from wood, and it’s got everything,” Hall says.

Rojas says her favorite was the Proprietor’s Stout, which is only available in Chicago. “It’s so, so good,” she says.

The blend, which was inspired by a jungle bird cocktail, was created by brewers Jason Krasowski and Paul Cade, who spent a night out on the town tasting cocktails. Cade and Brooke Bell, director of operations, greeted fans and answered questions in the “Meet the Brewer” kiosk. “So, Jason and I last year created the cola variant, and it was a ton of work,”Cade says. “So this year, we said, let’s make sure we have a ton of fun making this year’s. Our favorite jungle bird was at The Whistler. And then another one was at Longman & Eagle.”

To get the right balance of pineapple, coconut, banana, lime and rum flavors, they made 100 different mockups. “The proprietor’s blend is so different from the ones they’ve done before,” says Jenny Fornell, who drove in from Commerce Township, Michigan, with her fiancé, Scott Riopelle.

Fornell and Riopelle went to the last in-person Prop Day in 2019, and for the last two years, they drove in to pick up their bottles of beer. Their only complaint, they say, is they arrived later than they expected, and they had to leave at 2 p.m. before the second half of attendees were allowed in at 3 p.m.

“It was still fun, but we got cut short this year,” Fornell says. “But everyone here is so super friendly.”