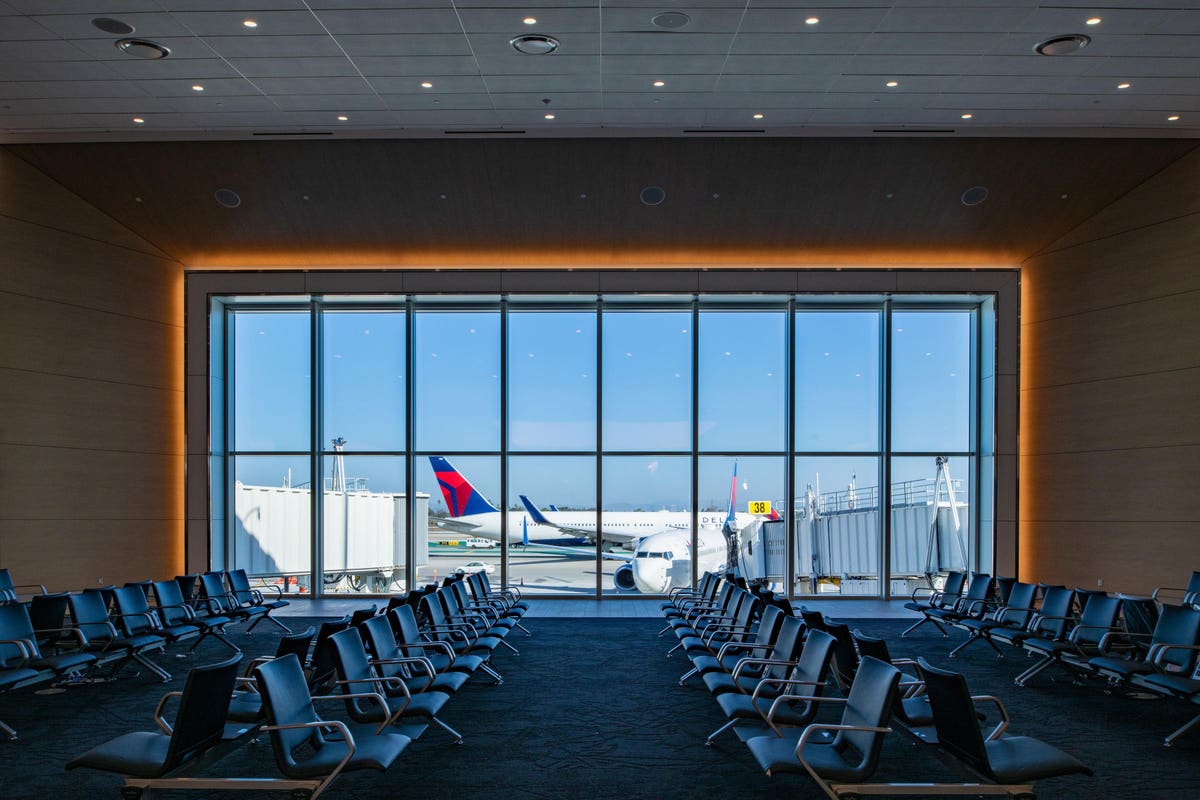 On October 5, Delta Airlines opens a brand-new extension to Terminal 3 at Los Angeles International Airport, universally known as LAX. The spanking-new terminal gives Delta an additional 9 gates, allowing it to bulk up to 27 by 2023. With new gates come new flights, including non-stops to Haneda (Japan), Seoul, Tahiti and Australia.

“Delta can now grow,” declared Scott Santoro, Vice President of Global Sales at Delta Airlines in a brief interview on-site. Already, he said, “We are the largest global premium carrier in Los Angeles.”

Delta, which controls both Terminal 2 and the expanding Terminal 3, has already taken over the top spot among US airlines at LAX. Aggressive spending on new facilities, including the expanded Terminal 3 and an enormous Sky Club opened in April, has no doubt helped drive the change.

Built in the 1960’s, Terminal 3 has had more of a transformation than a facelift. From the walls, ceilings to waiting area seats with power outlets, everything is new.

The new terminal will be packed with new retail and restaurants, including Chicken+Beer (from rapper/actor Ludacris), Alfred Coffee, Jamba for smoothies, and Hudson Nonstop for snacks and travel needs. They will join the already-open Homeboy Café, part of Homeboy Industries, a non-profit organization, (“Jobs not jail”), one of the largest gang rehabilitation and re-entry programs in the U.S.

Eater predicts “The Delta Terminal Will Soon Have the Best Food at LAX, Full Stop.” And if you have some time in the terminal, there’s Gameway. Billed as the first video game airport entertainment lounges service, it offers personal gaming stations and a place to eat and drink.

Also in Terminal 3 is the 29,000 square-foot Delta Sky Club. It features ‘cone of silence’ telephone-booth-style workspaces, plenty of seating with access to power and of course Wi-Fi. There are private showers and indoor and outdoor bars and dining areas. The outdoor area has a great (if noisy) view of runway operations.

Inside, what’s noticeable in a world of jam-packed airport lounges are the wide marble corridors, lending a feeling of spaciousness and relaxation. No doubt the fact that Delta is also maintaining its existing lounge in adjoining Terminal 2 also contributes to the uncrowded feeling.

At the launch of the new terminal, Delta demonstrated its First-Class seats for its new long-range Airbus A321neo aircraft. As Santoro put it, “We’re not an all-coach service.” The airline also offers Comfort Plus and now Premium Economy, in addition to First Class and coach.

Delta is taking an aggressive stance, seeking to scramble the near parity between the Big Four US airlines (Delta, American, United, Southwest) at LAX. While LAX may never become a “fortress hub” like Dallas-Fort Worth (DFW) is for American, Newark and Chicago O’Hare are for United, or Atlanta is for Delta itself, Delta spokespeople made it clear they are bullish on the lucrative LAX market. “Delta likes to win,” said Santoro.

Santoro says the $2.3 billion Delta has invested at LAX is part of $12 billion in system-wide upgrades. He says the expansion and upgrades at LAX put the airline “six to seven years ahead of our competition.”

Santoro also noted that Delta is deploying bigger aircraft at LAX, from Airbus A220 aircraft replacing smaller regional planes, to new A321neo and large A350 jets on transpacific routes. Australia tourist authorities, who had been calling for “more lift” to meet U.S. demand, are getting an addition three flights a week to Sydney from Delta, which will now operate eleven flights there per week.

But by 2022, the two airlines had traded places. Even without the new gates, Delta Air Lines had 19.94% of LAX traffic, followed by American with 16.88%, according to partial-year figures from Los Angeles World Airports (LAWA).

Delta is racking up the numbers without yet firing on all cylinders, says Santoro. While he says leisure demand is “over 100%” of pre-COVID numbers, international business demand is only up to 75%, while only 70% of domestic business travel has returned. As Santoro notes, “China is still pretty much shuttered.” Delta flights to Haneda (Japan) and Seoul are just opening.

Still, he says it’s a “brand new day” for the airline. “Delta considers itself the airline of business travel.”

Business Travel News noted that in August, Delta was the top US airline in on-time performance with 83.7% of its flights arriving on time. That bested rivals Alaska Airlines (82.2%), United Airlines (79.8%) and American Airlines (75.8%.)

Another driver for Delta and its new terminal will be the ramp-up to the LA28 Olympics. Delta is the official airline.

Of course, a new terminal is only as good as the airport around it. LAX is, to put it kindly, a work in progress, or a construction-jammed, traffic-strewn nightmare. I was lucky to park at Terminal 1 and dodge traffic and construction for the fifteen-minute walk to Terminal 3. Two hours of parking was just $25, versus valet at $70.

But the LAX ‘people mover’ should be in operation within two years. And after a miserable summer of delayed and cancelled flights and packed airports full of stranded travelers, seeing spanking new Terminal 3 shows that there’s hope for the airlines yet.