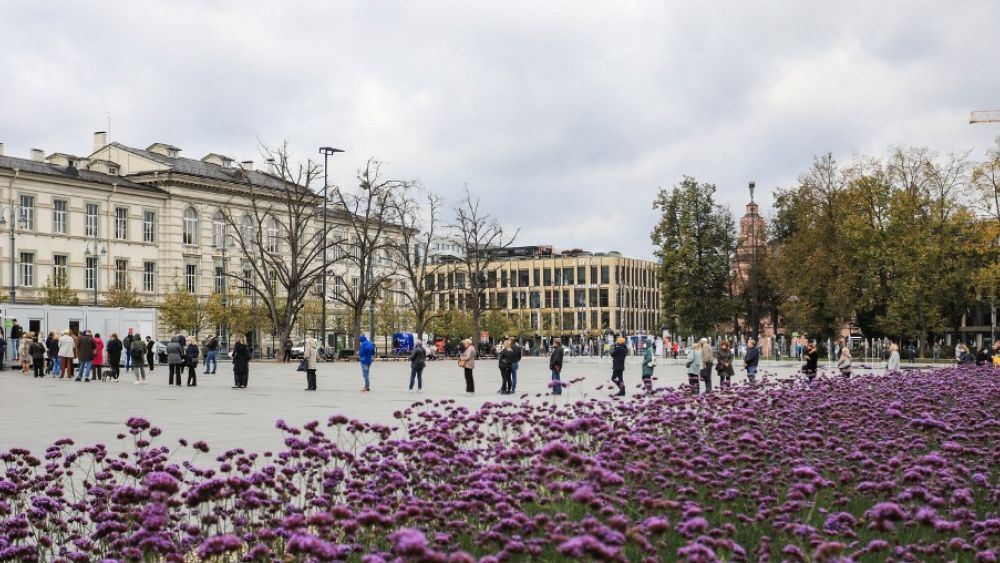 Five years ago, Lithuania’s Farmers and Greens Union (LFGU) was an obscure political party that struggled to reach the 5% threshold to qualify for seats in parliament. In 2016 it turned its one seat in the Lithuanian Seimas into 51, and became the Baltic country’s new government.

For the LFGU, the victory was part of a populist wave that swept global politics in 2016. From the Brexit referendum to the election of Donald Trump, genuine anger with politics-as-usual saw voters back causes and individuals that – for better or for worse – went against the grain.

“People were getting fed up with the traditional political parties [and] their futile bickering,” Tomas Tomilinas, an LFGU MP, told Euronews.

“They were searching for new faces, and we were certainly them.”

Four years on and the LFGU again faces an election in Lithuania on Sunday, this time as well-known faces and amidst the lingering COVID-19 pandemic.

But the picture for the party is mixed. On the one hand, prior to COVID-19 it was struggling in the polls and analysts in Lithuania were predicting that voters would punish it come the October 11 election. On the other, the COVID-19 pandemic may just have rescued LFGU fortunes.

The Lithuanian government recently launched a €2 billion financial package to help businesses bounce back from the coronavirus-induced economic crisis, while the European Commission earmarked €602 million for Lithuania in loans. Much of that cash has found its way into the pockets of voters, who are thankful to the government, and to the LFGU.

“Their support hovered in single digits before the strike of COVID-19. It has been a disaster for most, but a true blessing for the farmers,” said Vytautas Dumbliauskas, associate professor of political science at Mykolas Romeris University in Vilnius, referring to the LFGU.

For a long time, LFGU was looked down upon as a tiny regional party with a green, agricultural agenda. Its vociferous “no” campaign in the 2012 national plebiscite on building a new nuclear plant in the country – 62.6% voted against – did not translate into electoral success.

But by 2016, malaise had got hold of Lithuanian politics, dominated for decades by either the left-wing Social Democrats or the right-wing Homeland Union – Christian Democrats (HU-LCD).

A third party, the Lithuanian Liberal Movement, did have some electoral success but was devastated by the accusation – still in the country’s courts – that its leader took €106,000 in bribes in return for political influence in 2016. Other parties, including Electoral Action of Poles, represent a portion of Lithuanian voters, in this case, the Polish minority in the country.

In 2016, the LFGU vowed to upset the applecart, and since its victory has very much sung from the populist playbook. It has championed national identity, or ‘Lithuanianess’, and – like other right-wing parties in Europe, namely Poland’s ruling Law and Justice Party (PiS) – come out against LGBT rights in Lithuania, winning support with its conservative, rural and Christian base.

In the former campaign, it has had wins and losses. In 2018, the LGFU proposed that Lithuanian schoolchildren should have new uniforms adorned with national symbols including the country’s historical coat of arms. The plan, which coincided with the centenary of the declaration of the Lithuanian state in 1918, was ridiculed by opponents and promptly dropped.

Despite being, in name, a green party it has also shunned the rest of Europe’s green movement, opting out of the European Green Party (EGP) bloc in the European Parliament in Brussels due to its support for LGBT rights.

Asked about this decision, Tomilinas told Euronews: “We want a closer relationship with the Greens in Brussels, and we discussed the intention to have a formal membership to the European Green Party (EGP).”

“But first we need to put our house in order first. At the moment we still have different views and opinions between strategic actors in the party. We talk about integrating to the European family when we have yet to integrate properly our own.”

Critics say that the LFGU has little coherent political agenda, other than pandering to voters outside of the cities with both their political stance – nationalist, traditionalist and Christian – as with their policies, which include generous handouts to pensioners, a reduction of the cost for drugs bought in pharmacies and the establishment of a state bank

“They never had a clear programme, nor vision how to manage [the] state. But they’ve been playing the populist card from scratch – quite successfully,” said Vytautas Bruveris, chief correspondent and analyst at the daily Lietuvos Rytas.

“[Their policies] reverberate very well with swathes of Lithuania’s population.”

At the top of the LFGU political tree is Ramunas Karbauskis, the multi-millionaire owner of Agrokoncernas, one of the largest agricultural groups in Lithuania. As well as a business tycoon, Karbauskis is something of a celebrity, having written and produced a wildly popular TV series Naisių vasara, based on stories from the village where he was born.

As elsewhere in Europe – including Hungary and Poland – the rise of Lithuania’s populists has come alongside attacks on both the press and the judiciary, said Andzeij Puksto, associate professor at Vytautas Magnus University in Kaunas, Lithuania’s second-largest city.

“Having met resistance from all over, LFGU has shown some authoritarian signs. Let’s not forget that LFGU attempted to curtail rights of the national broadcaster (LRT),” Puksto said.

“In mimicking Poland’s ruling populist Law and Justice party, LFGU has hinted of changes in our judicial system. I am afraid that, with the new mandate in their hands, they can swerve to the realisation of their authoritarian tendencies.”

The impact of COVID-19 on the LFGU’s fortunes is not just in the ability to be able to hand out billions of euros in bailout money to voters before election day. Lauras Bielinis, a Lithuanian political scientist and a professor at Vytautas Magnus University, said that the pandemic has resulted in an “inertia” ahead of the election amongst voters that plays into the LFGU’s hands.

“The health crisis has messed up everything and those who are promising more now are in a better position ahead of the elections,” he said.

Members of the Lithuanian opposition, unsurprisingly, go even further.

Simonas Gentvilas, a Liberal member of the Lithuanian parliament, said that the LFGU has “soaked” voters in COVID-19 fallout money and is now set to reap the benefits.

Indeed, economically Lithuania has fared far better than many of its neighbours during the COVID-19 pandemic, with GDP contracting by just 3.7 per cent in the second quarter of 2020 year-on-year, less than previously expected and second only to Luxembourg in Europe. Business leaders, however, doubt that the LFGU can take credit for that.

“Many Lithuanian companies are producing niche-markets oriented production, which were less affected by the virus,” said Sigitas Besagirskas, president of the Vilnius Industry and Business Association.

There is a chance, say analysts, that the two major players prior to 2016 – the Social Democrats and the Conservatives could form an alliance after Sunday in order to bring down the LFGU government, but Dumbliauskas, at Mykolas Romeris University, said that the two rivals would have to “move mountains” in order to find enough common ground.

“The ideological divisions they have are just too stark to override. Importantly, at the end of the day, it is LFGU that would win from such a marriage,” he said.

Interestingly, the biggest challenge to the LFGU on Sunday — if no-one wins more than 50% of the vote on October 11, the two most popular parties will take part in a run-off election on October 25 — may not come from more established political parties or the opposition but from another upstart populist party, the Labour Party, despite its founder, multi-millionaire businessman and MEP Viktor Uspaskich, has been handed a four-year prison sentence for fraudulent bookkeeping in the party. A higher tier-court has exonerated him, however.

“I believe the party is the dark horse of the election,” Bruveris said.

“But I’d see nothing good from its win, as the party – like the farmers – have been populist since the very start.”

Every weekday at 1900 CEST, Uncovering Europe brings you a European story that goes beyond the headlines. Download the Euronews app to get an alert for this and other breaking news. It’s available on Apple and Android devices.