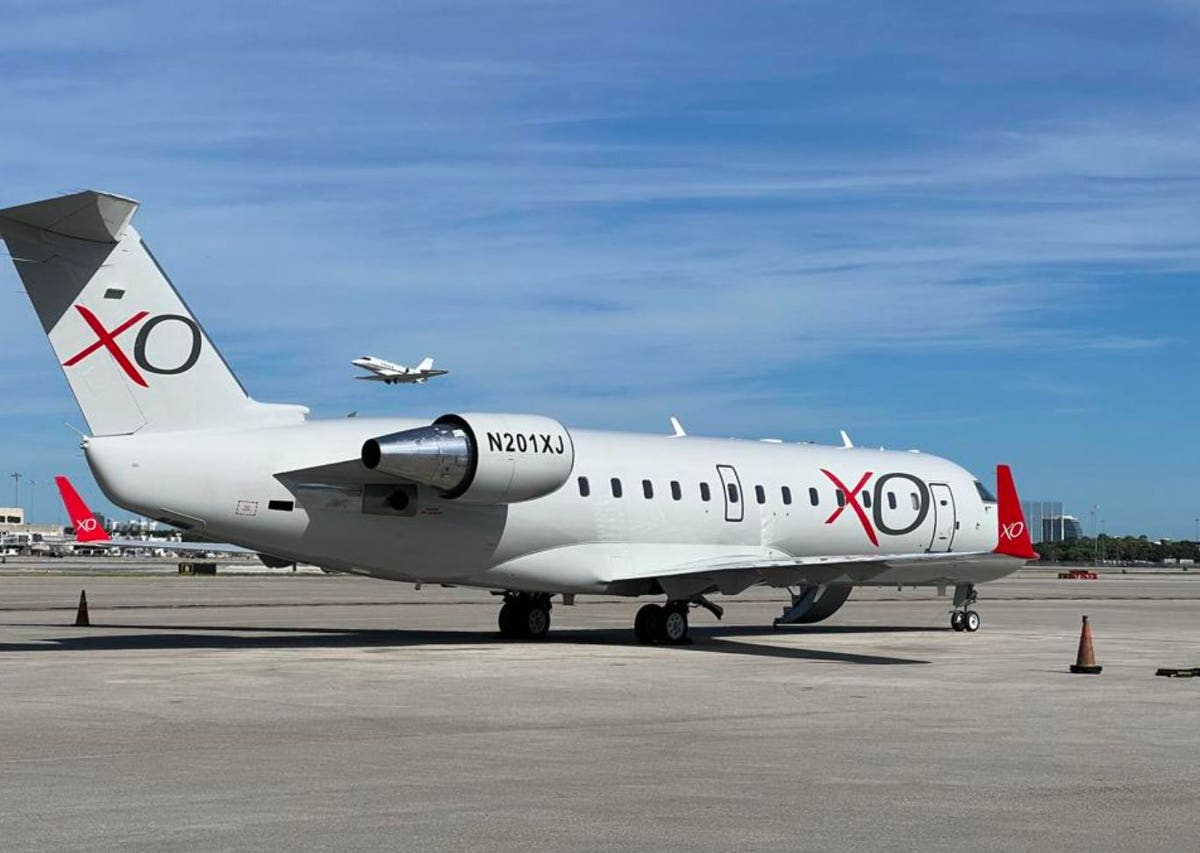 Some good news for frustrated flyers! There are now more ways to avoid crowded airports, lost luggage and the other unpleasantries of the domestic airlines. XO is doubling down on making private aviation more accessible and environmentally friendly for consumers with an expanded schedule of confirmed private jet flights it sells by the seat between New York and South Florida.

The shared flights allow for up to 18 passengers to fly together, instead of the typical four passengers on a charter aircraft. It comes as private aviation is under attack from climate campaigners, including by theme park heir Abigail Disney, a former user, who recently renewed her call for private jets to be banned.

Earlier this month, XO added a new route between Republic Airport in Farmingdale on Long Island, New York, and Palm Beach International Airport. It now offers as many as six confirmed by-the-seat private jet flights per day between New York and South Florida. There are additional crowdsourced flights as well. Plans are to expand jet-sharing offers even further.

During an exclusive look at one of the two jets XO parent Vista Global owner Thomas Flohr acquired specifically for the shuttles, XO Chief Marketing Officer Lynn Fischer told us the company is tapping into the wealth of data from millions of website searches as it contemplates added routes. It already has 15 crowdsourced flights from New York and South Florida to Aspen confirmed for the first two months of 2023.

The crowdsourced flights require a specific number of flyers to book for the flight to be confirmed. If the flight doesn’t get enough bookings, you get your money back. The data hints routes XO could add in the future on a confirmed schedule basis, like the New York-South Florida flights. Fischer says cultural, sporting and business events offer fertile ground as well. Think Super Bowl, South By Southwest, F1, Art Basel Miami.

Speaking about flights between South Florida and New York, Fischer says, “We have really scaled our operation.” Prices start at under $1,500 one-way and can range up to nearly $3,000, so much like the airlines, XO is driving profitability by offering better deals to customers who are willing to travel on lower demand dates. Fischer says many flights sell out completely.

So, what is it like to buy and fly on one of these by-the-seat flights?

Booking is easy. You do it via the XO app or desktop interface. It’s like booking an airline ticket, however, in this case, you click on the “Seats” button. The other option is for “Charter,” which refers to booking the entire aircraft. You enter the route where you want to go (see below).

There is a choice between regions – South Florida or New York – and specific airports – Westchester County, Teterboro, and so on. After clicking search, a calendar shows lowest prices by day for the next several months. A green line under the date means there are confirmed flights where you can book seats. An orange line means somebody else has started a crowdfunded flight, but enough seats to confirm the flight have not been sold yet.

When I entered a specific South Florida airport, it still gave me options from nearby airports as well, so entering a specific airport instead of a region didn’t seem to make a difference.

Once you find a date with a green underline, click on that date and it brings up the by-the-seat flight options for that day. Flights are priced dynamically, meaning they go up and down, just like with the airlines. From one day to the next, I noticed lowest prices changed by as much as $300.

Between South Florida and New York airports, XO has as many as six confirmed by-the-seat flights per day. The page showing that day’s flights provides departure and arrival airport, departure time, available seats, and price. On a single day, I found prices ranged from $1,890 for a 4:30 pm FLL-HPN flight to $2,890 for a mid-morning OPF-TEB departure.

On some, but not all routes, you can initiate a crowdfunded flight. When I searched for by-the-seat opportunities between Bozeman, Montana and Tulsa, Oklahoma, I received a message, “Currently, there are no seats available on this route. Do you want search Charter instead?”

When I looked at South Florida to Boston, dates had prices but no underlines. This means XO would have allowed me to initiate a flight, which would have resulted in an orange underline on that day in the calendar until enough other people signed up for my flight.

For the date I was looking at, the price from South Florida to Boston was $4,390 for a seat in a light jet. To confirm the flight required seven seats being sold. There was also a heavy jet option for $4,890 per seat requiring 10 seats to be sold.

After finding a confirmed flight between South Florida and New York, it would have been just a couple more clicks to book my ticket. You can save money by becoming a member. There are different tiers, some requiring deposits up to $250,000, but for the shared flights, the entry-level priced at $595 per year works.

Vista Global has acquired two Bombardier CRJ200s for the XO flights (one is currently in service) that are reconfigured with 18 seats. It also uses similarly configured jets from third-party operators. The flights scheduled to use the XO branded airplane are identified with the XO logo on aircraft image on the flight availability pages.

Members are given priority seat selection in advance of the flight. All remaining seats are assigned by XO prior to departure. For groups, XO does its best to accommodate seating them together, according to a spokesperson.

The big perk of flying on XO’s by-the-seat flights is that you can show up as little as 30 minutes before departure and you depart and arrive at FBOs, industry nomenclature for the buildings that host the lounges used by private jet travelers. There are no pre-check lines because there are no TSA lines or metal detectors. When you arrive, you are met by an XO representative who checks you in and you can relax until boarding, typically about 15 minutes before the scheduled departure.

Unlike the lavish lounges some airlines offer their first and business-class passengers, don’t expect more than complimentary coffee, water and, at some FBOs, a popcorn machine, as well as vending machines that offer sodas and snacks.

Baggage for the New York – Florida shuttles on the large cabin jets is limited to one piece not to exceed 50 pounds as well as a smaller bag in the cabin, such as a backpack or laptop bag.

In terms of bringing furry best friends, the spokesperson says, “We do our best to accommodate our clients as well as their companions onboard. To ensure a safe and seamless journey, we do require updated vaccination records as well as formal requirements for service animals.”

If you are wondering how much these jets cost, the price for new CRJ-200s was around $25 million. An advertisement on the website Controller.com lists a year 2000 version for $5 million, which it describes as “Shuttle Ready – Just like Aero/JSX/XO.”

Once onboard, you will find the XO CRJ 200s seat 18 passengers in a 1-by-1 configuration. All seats have windows and direct aisle access. XO also uses similar aircraft from third-party operators, some of which have seats that face each other, although still in a 1-by-1 layout.

Seats have about 40 inches of pitch between rows and while they are the same style as you will find in first class on domestic narrowbody flights you have both a window and direct aisle access. You also have noticeably more legroom. Since the seats are slightly staggered you are not directly across the aisle from your neighbor, good if you are traveling alone, a bit harder to have a conversation if you are traveling with a friend or colleague.

Each seat has a wide armrest perfect for a drink, and there is a ledge that runs the length of the cabin wide enough to put a purse or move your laptop during meal service. Recline is comfortable, but not enough to impede the person behind you. There is no legrest. There is a sturdy foldout tray table and a personal light and air vent above every seat.

Guests are welcomed with bottled water and a plush hot towel. There are two cabin hosts on each shuttle flight. Cabin attendants on the XO shuttles also work flights for sister VistaJet, so they receive the same training, including an intensive two-week session in Malta.

To start, there is an open bar with sodas, wines and spirits. Plans call for adding popular premixed cocktails. Meal service begins with a pre-plated selection of hors d’oeuvres and a ramekin with potato chips accompanied by Prosecco served in stylish glassware.

There is a choice of at least three hot entrees you can select from a printed menu, a rarity for anything except transcontinental premium airline flights. For my on-the-ground in-flight experience the options were a stuffed veal chop, snapper, or a New York strip steak. Deserts choices were a chocolate lava fondant or a mini Bundt cake.

There’s also a snack basket with an assortment of sweet and savory premium snacks, but it would have been nice to also see some fresh fruit, maybe apples and bananas.

If you want to work, there is complimentary WiFi. There are two lavatories. One is in the front and the other in the rear.

When you land, any checked luggage is returned in minutes. XO can arrange transfers, and unlike the airlines, you can be on your way in minutes, or if you want to make some calls, use the passenger lounge in the FBO.

A look at Google Flights shows nonstop flights between New York and Miami in first class starting for under $300 each way and plentiful options for around $500, so you will be paying a premium over the airlines. Of course, you avoid the mess of crowded airport terminals, long lines and lost luggage. There are other scheduled by-the-seat options. JSX uses private terminals and flies between Miami International Airport and Westchester County Airport, with fares starting at under $700, but with seats more typical of economy class and more legroom. It only offers one flight per day. Blade offers seasonal by-the-seat service between Westchester County and Miami and Palm Beach. It uses similar jets to XO, but is typically more expensive, although it sells trip packs and has a helicopter transfer option to and from Manhattan. A new player, Fleet Clubs, plans to use 60-seat Boeing 737s with all first-class seating between New York and South Florida, although it recently delayed its launch from December to June.