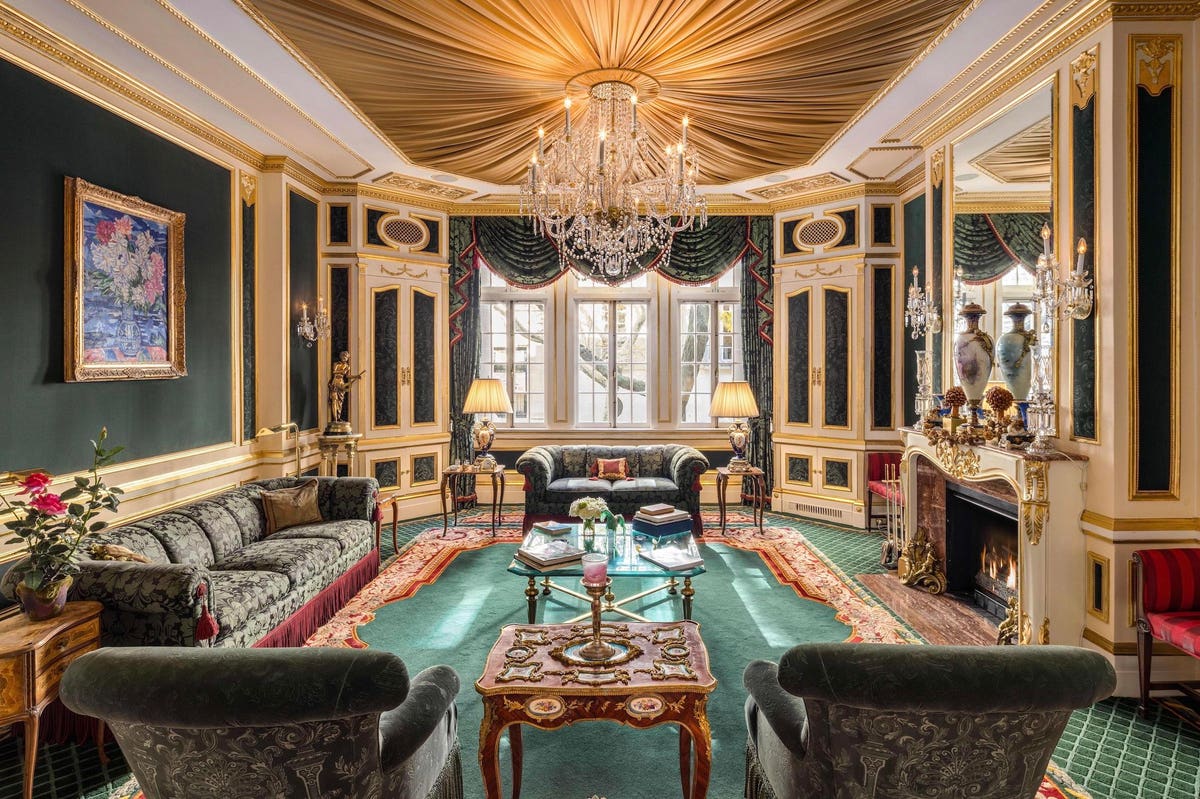 The former residence of Ivana Trump, the ex-wife of former President Donald Trump who passed away in July, has officially hit the market for $26.5 million. She purchased the townhome in 1992—the same year her divorce from Trump was finalized—for $2.5 million, according to The Wall Street Journal, and lived there until her death.

The limestone-clad townhouse, located on East 64th Street between Fifth and Madison, is like stepping back in time to the 1980s, an era when opulence and gold-encrusted everything dominated over-the-top luxury interior design. The Adamesque-style home—an 18th-century neoclassical interior design and architectural style recognized by features like curved walls, grand columns, elaborate plasterwork, pastel hues and frescoes—is notable on this coveted block for its limestone facade with a mansard roof and black-and-gold embellished grilled doors.

Inside, the opulence continues with a 1980s meets Gilded Age aesthetic. Upon entering, the formal gallery welcomes you with deep-red-colored carpets, a winding marble staircase, statues, gilded custom paneling, an Italian crystal chandelier and silk damask wallpaper. There’s a total of five stories and the home spans 8,725 square feet with five bedrooms and 5.5 bathrooms. The second floor houses the entertaining level and has two formal entertainment areas, each with 10.5-foot-high ceilings. One of the entertaining rooms is covered in jewel tones—predominately a deep emerald green—with tassels, many prints, and more gilded paneling. Even the fireplace features gold-embossed millwork.

She details her style as “luxurious and whimsical” in her 2017 book Raising Trump and also says she spent a lot of time redesigning and re-configuring the home, as it was a former dentist office before she purchased it.

Sumptuous fabrics are found in nearly every room, including the Versailles-inspired dining room with walls covered in gold fabric, yellow upholstered chairs, a marble fireplace with detailed gold millwork and more red carpet. Each room has a different look and feel, like the full, leopard print library. It’s decked out in leopard print furniture from the sofas to the side chairs to the fabric wallpaper, curtains, and artwork. All of it, of course, is emphasized by tinges of gold.

The primary suite spans the entire third floor and features an enormous bed with a seating area, fireplace, and a set of three French doors that open onto a private terrace. The en suite bathroom is clad in pink marble, with a pink Onyx marble soaking tub, pink marble countertops, and pink marble floors.

The other bedrooms are located on the fourth floors and can be converted into separate spaces for the future buyer’s needs. There’s plenty of space to work with, as the width of the townhouse spans 20 feet. Other amenities include a media room, home office, garden, and Swedish sauna in the basement.

Trump’s son Eric told The Wall Street Journal that he, his brother, Donald Trump Jr., and sister Ivanka lived in the house during their teenage years. Trump, who is from the former Czechoslovakia, also had homes in Florida and France. The proceeds of the home will be split between her three children. The home is co-listed by Adam Modlin of Modlin Group and Roger Erickson of Douglas Elliman.