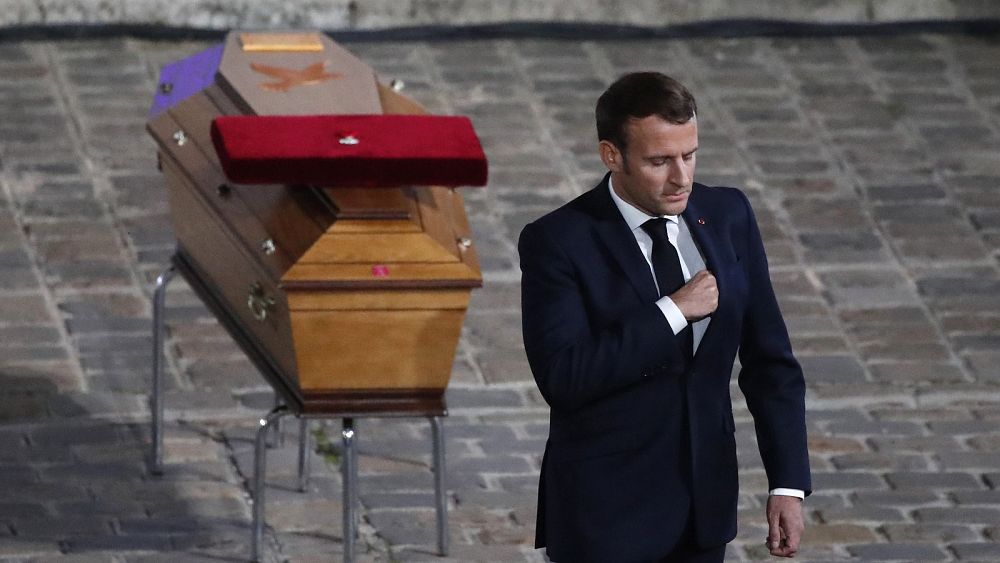 French President Emmanuel Macron said on Wednesday that France would continue “the fight for freedom” at a national tribute in Paris to the teacher beheaded for showing cartoons of the prophet of Islam.

“We will not give up cartoons, drawings, even if others back down,” he insisted, saluting “one of these teachers that we do not forget” during a speech in the courtyard of the Sorbonne, a symbolic place of the spirit of the Enlightenment and teaching.

Macron, having earlier awarded the Légion d’honneur – France’s highest honour – posthumously to Samuel Paty, denounced the “disastrous conspiracy” and “hatred of others” of which the history and geography teacher fell victim “because he embodied the Republic.”

Paty, 47, was beheaded by an Islamist extremist on October 16 near his secondary school in Conflans-Sainte-Honorine, Yvelines, ten days after showing his pupils caricatures of Mohammed during classes on freedom of expression.

“We will continue, teacher. We will defend the freedom that you taught so well and we will bring secularism,” added Macron at the tribute attended by 400 guests, including around 100 students from schools in the Ile-de-France region and many political figures.

Outside the Sorbonne, at the foot of a giant screen, a crowd of several hundred people came to watch the ceremony and pay their last respects to the murdered teacher.

“Here civil society really needs to pull itself together, we need a united front without demagogy, and it’s going to have to go through us, through the National Education, through a better consideration, because we’re on the front line with young people,” underlined Catherine Prevost-Meyniac, an eco-management teacher who came from Angers.

Leaving the event, Macron told one teacher who called out to him “We will not give up” as he walked away from the Sorbonne.

Tributes and gatherings in memory of the teacher have taken place elsewhere in France, notably in Occitania, where cartoons by Charlie Hebdo vilifying religions were projected on the facades of official buildings in Toulouse and Montpellier.

Paty was “targeted” by activists online following his lesson, specifically in posts from Brahim C., the father of one of the students in the class, who said his daughter had objected to the lesson, anti-terrorism prosecutor Jean-François Ricard told a press conference on Wednesday.

It later emerged, however, that the 13-year-old girl was off sick on the day Paty showed the caricatures of Muhammad in class.

The 18-year-old attacker, a Chechen refugee who was recently radicalised, had read information about these social media posts and was inspired by it, Ricard said.

Seven people have now been detained by police in connection with Paty’s murder, including two minors.