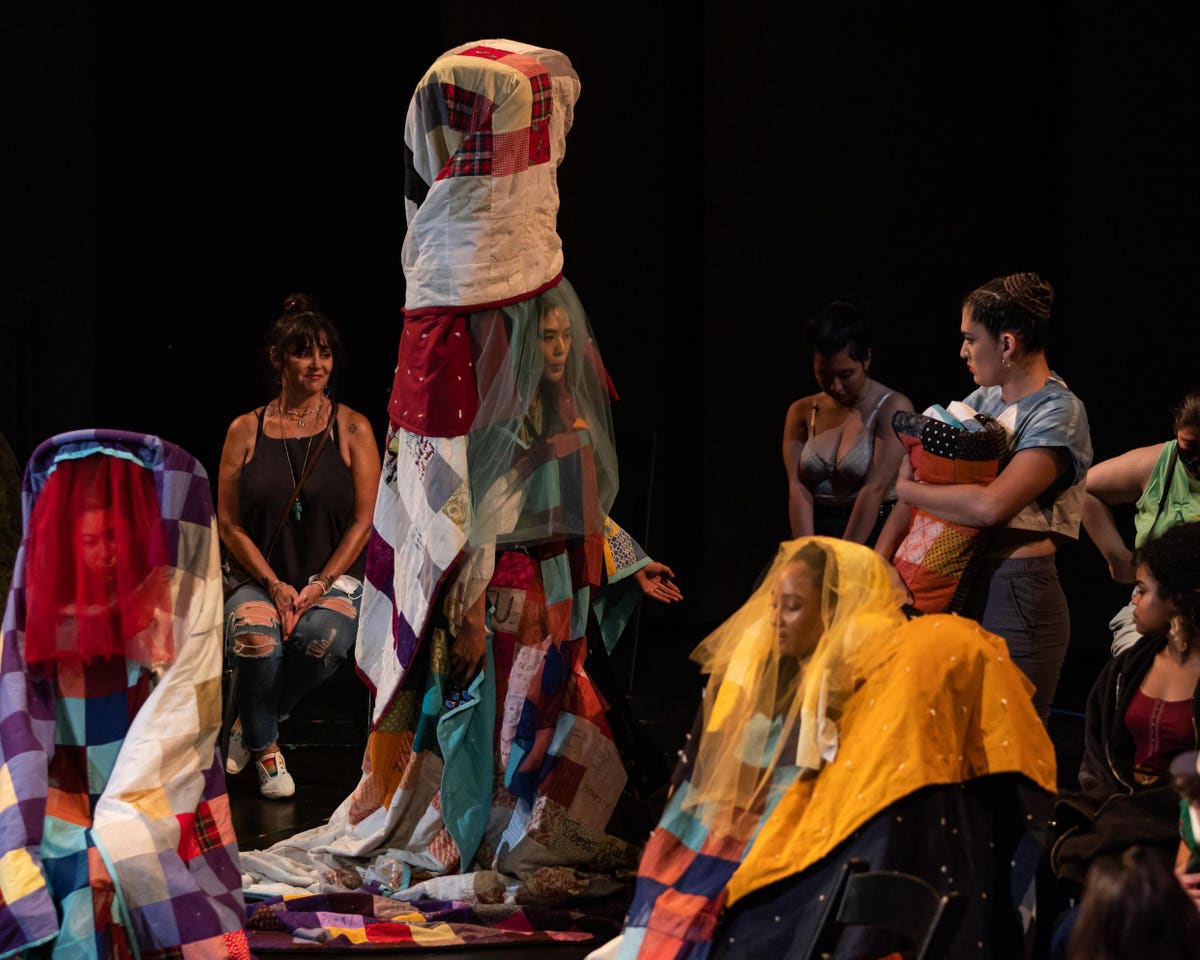 Being Future Being is a new work by artist Emily Johnson which combines movement, images, story and sound into a piece where the focus is Indigenous thriving. It will have a related performance outdoors on October 15th and a New York premiere at New York Live Arts from October 20th through the 22nd. The October 21st show will have a Stay Late post-show conversation with individuals from the Branch of Knowledge, a collective of Lenape matriarchs who are building power by gathering together and collaborating with accomplices who live in their homelands.

Johnson is a Bessie Award-winning choreographer, Guggenheim and United States Artists Fellow and a recipient of a Doris Duke Artist Award based out of New York City. She is of the Yup’ik Nation and, since 1998, has created work that considers the experience of sensing and seeing a performance. Her choreography and gatherings have been featured across the country and in Australia.

“We are excited to welcome Emily to New York Live Arts for the third time. It is a privilege to witness the evolution of an artist who has been boldly forging Indigenous futurity in every aspect of her practice. We cherish the opportunity to learn and evolve as an organization,” said Bill T. Jones and Janet Wong, Artistic Leadership at New York Live Arts.

Being Future Being’s creative team includes Diné composer Raven Chacon, sound designer Chloe Alexandra Thompson, who is Cree; visual artist, designer and traditional tattooer Holly Mititquq Nordlum, who is Iñupiaq, IV Castellanos, who is mx Indige Quechua/Guaraní, created the masks and wearables and served as the production manager. Quilt-Beings were designed by Korina Emmerich, who is Puyallup, with quilts designed by Maggie Thompson, who is Fond du Lac Ojibwe. Costumes were created by Raphael Regan, who is Sisseton-Wahpeton, Eastern Band of Cherokee and Diné. Joesph Silovsky served as Scenic fabricator with lighting design by Itohan Edoloyi. The performers featured in the piece are Ashley Pierre- Louise, Jasmine Shorty, which is Diné, Stacy Lynn Smith and Sugar Vendil.

Forbes spoke with Johnson about the process of creating Being Future Being during the pandemic. We also discussed what she learned while creating this piece and what the audience response has been so far.

Risa Sarachan: Being Future Being is a vast collaborative effort. How did you gather your collaborators?

Emily Johnson: Being Future Being is a team of collaborators who are powerful within a strong kinstillatory network, working with the intention of being in the better future we desire, deserve and work for. The makers and performers of Being Future Being are activating technologies of transformation.

The dancers, Stacy Lynn Smith, Ashley Pierre-Louis, Sugar Vendil, and Jasmine Shorty, are dancing at the cellular level – turning the attention of their cells toward justice, a reorientation that could be learned. We protect one another in the process of performing this work and we collaborate with more-than-human kin in exchange for deepening reciprocal protection and communication.

IV Castellanos, who works as Interkinnector with our Architecture of the Overflow structure then thinks through these protections and crafts ways to build replicable, locally responsive, Indigenous-centered actions that encourage collective community self-determination, direct response, support, and action with local land protection efforts.

Sarachan: What initially inspired it?

Johnson: Being Future Being came from a desire to conjure a better future in the present. My friend Allison Warden recently reminded me that we, Inuit peoples, are always living in our future and so in a way there is no future, and yet, what an Indigenous futurism this is.

Raven Chacon, who composed the sound score for Being Future Being, once told me he doesn’t think of the future. Indigenous peoples are not and were not meant to have futures vis à vi the ongoing settler colonial project. Our existence, our thrivance: is always. I think this is a radical way to think of the future, too.

Sarachan: What did you learn while working on it?

Johnson: In many ways, each of the performance works I make teaches me what is next. For more than a decade, I have been working with collaborators and communities of people who think through and activate the questions, “What do you want for your well-being? For the well-being of your chosen friends and family? Your communities? Your world?”

Thousands of ponderings to these questions and hundreds of ideas were written on 84 hand-stitched quilts, themselves made with communities across what is currently called the United States and Australia, and Taiwan. A student, then a recent refugee to Australia, looked at the quilts and the answers they and their colleagues were talking over and said, “Oh, I see, these are like maps to the future.”

My dear collaborator Karyn Recollet and I like to think of these quilts as vessels, as transportation devices. They were designed by Fond du Lac Ojibwe artist Maggie Thompson and have served as house and home, warmth and comfort for multiple performances and Kinstillatory gatherings through the years. They are transformed again for Being Future Being by designer Korina Emmerich who crafted them into grounded and fantastic worn structures, which we call Quilt-Beings. I think these quilts, or rather, everyone who stitched and transcribed their real hopes into them – told me to start making Being Future Being. Something said, we need to live in that better future, now.

Sarachan: Did COVID change the process or delay it?

Johnson: Making this work through the realities of the pandemic became part of our work. In a related performance, The Ways We Love and The Ways We Love Better, Monumental Movement Toward Being Future Being, a cast of ten came together outside in late summer 2020 to rehearse. We gathered in a wide circle with lots of distance between us in our masks, and we recognized each other and that this was the first time most of us had seen and been in proximity of others in months. What a responsibility, to remember what the pandemic taught and is teaching us.

In early 2020, along with most performing artists, all of my contracts and promises of contracts were canceled. The ensuing document co-authored by a collective of arts workers, Creating New Futures: Working Guidelines for Ethics and Equity in Presenting Dance and Performance and initiatives like We See you White American Theater called for structural change and justice in the performing arts world and beyond. We are still in the midst of demanding the necessary outcomes.

The biggest threat to Being Future Being actually came before the pandemic with realities of racial injustice, sexism and structural violence. The experiences of which are detailed in a document I published in early 2021 titled, A Letter I Hope in the Future, Doesn’t Need to Be Written.

Sarachan: How does your activism inform your creative work?

Johnson: There is no separation between anti-colonial futures and present LandBack, abolitionist and solidarity efforts. Just as there is not a separation, for me, between the making of performance, the structural decolonization work that occurs during and within, and the lived joy of gathering with other humxns and our more than human kin – in effort. I suppose Being Future Being has been teaching me, in the present, to understand this more expansively than I did before.

Sarachan: What do you hope it might bring to Indigenous communities?

Johnson: Being Future Being is in relation to the ground. Even if we are on a stage, we are thinking of the land underneath. We are with that ground. Being Future Being, through its sound, movement and activating attention takes down the walls. I understand this doesn’t actually physically happen in the moment of performance, but we become part of the vital activation against barriers, imposed limitations, structural violence, and colonial notions of the border. And we ask audiences to become part, too.

Being Future Being is necessarily agitating. And I believe it agitates the right people. During our premiere in Los Angeles, some of these people walked out of the theater. This is part of the definition, part of a crucial discernment; this is finding our allies, our accomplices. We can all gather here. And those who choose are invited to stay in a long process of the overflow, to show up again and again for local land protection efforts, in the ways they are explicitly asked to.

This interview has been edited and condensed for clarity.

Tickets for Being Future Being can be purchased here.