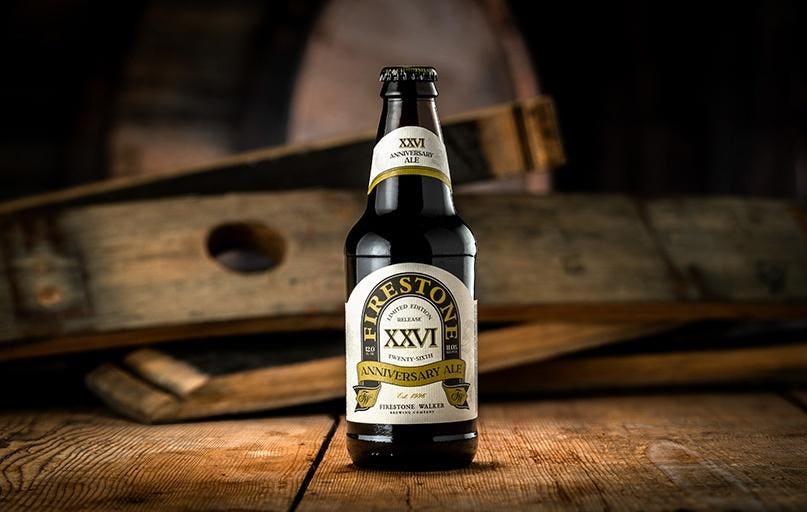 There’s a saying that it takes a lot of good beer to make a great wine, but a group of actual winemakers walked into a brewery in Paso Robles…and came out with an anniversary ale.

“We’re talking about a who’s who of Paso Robles winemakers,” says Matt Brynildson, brewmaster. “We’re fortunate to call them our neighbors and friends and they never disappoint when it comes to our annual blending session.”

The way it worked is that the winemakers broke into teams and then created different blends of barrel-aged components.“We offered up a perfect spectrum of beers to choose from: a light and a heavy stout, an imperial brown ale, a golden ale and two styles of barley wines,” Brynildson says.

Next, the winemakers and brewers blind tasted all of the candidate blends, then voted as a group to crown the winner that would become XXVI.

The winning blend was created by Valia From and Emily Miller, of Desparada Wines, Russell From, of Herman Story Wines; and Danny “Fullpint” Becker, editor-in-chief, of TheFullpint.com.

This latest Anniversary Ale is just super delicious and refined,” Brynildson says. “It’s driven by two barrel-aged stouts, but it’s much more than that. It has this perfect balancing point with a lot of spirits barrel character, and there’s an underlying freshness that elevates the mouthfeel.”

“It was nice to have our classic Bravo brown ale back in the mix as a complement to our Parabola and Velvet Merkin stouts,” Brynildson says. “Heavy Things contributed a subtle dimension of brandy barrel character. Finally, Helldorado and Wheat Wine added a splash of freshness to the beer.”

Firestone Walker’s collaboration with local winemakers dates back to 2006, when Brynildson was first tasked with creating the inaugural Anniversary Ale to mark the brewery’s 10th anniversary.

“It’s a tall order to blend all of these distinct beers into a harmonious whole,” Brynildson says. “That’s why we bring in the winemakers. They are practicing experts in the art of blending.”

XXVI is rolling out now in limited quantities to all Firestone Walker markets, and is available at each brewery location and online at FirestoneBeer.com for a limited time.