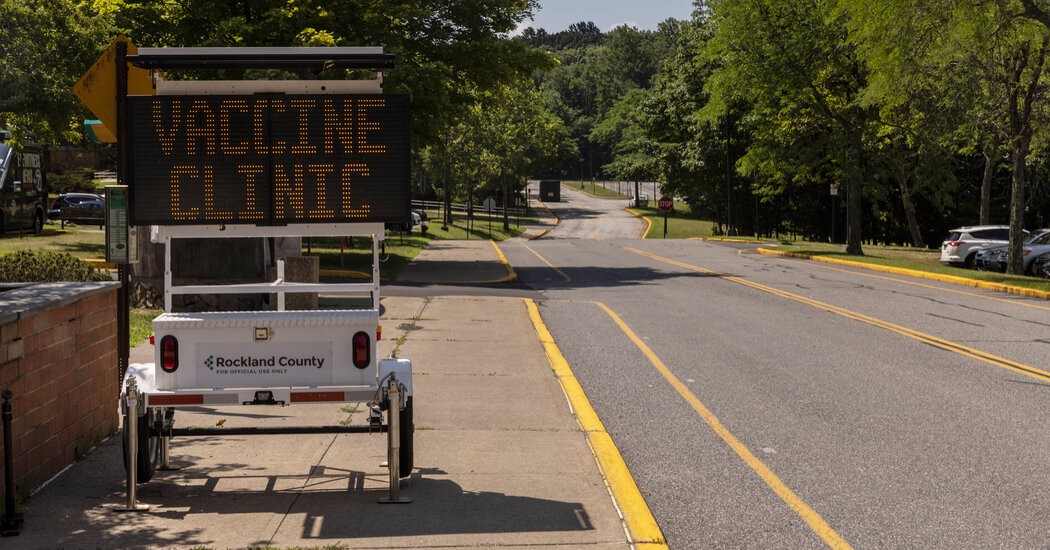 The scene in Rockland County on Friday morning might well have been from a time capsule: residents rolling up their sleeves and getting vaccinated for polio, the highly infectious and sometimes fatal disease that has made an unexpected appearance in New York City’s suburbs.

The sudden interest in such inoculations came a day after the county authorities announced that a local adult, unvaccinated, had tested positive for the disease. The case prompted alarm from local officials and residents, some of whom couldn’t remember whether or not they had received the vaccine, which has been widely available since the 1950s.

Among them was Todd Messler, 64. He was one of 18 people who received shots at a pop-up clinic set up by the county health department in Pomona, N.Y., about 35 miles north of Midtown Manhattan.

“It hurt like hell, but I feel better,” he said. “It’s definitely the way to go.”

On Friday, state and county health officials were investigating the case, interviewing immediate family members of the patient and urging immunizations for anyone among the general public who had not received one.

Bryon Backenson, the director of the Bureau of Communicable Disease Control at the state Health Department, said that there was no indication yet of additional cases, though he noted that the state was trying to acquire as many samples as possible to test and was checking wastewater for signs of the virus.

Officials were also trying to spread the word about the seriousness of infection, as “people are not familiar with polio,” Mr. Backenson said, noting that he himself was not exactly conversant with it.

“The last real polio case I saw in a person is probably pictures of F.D.R.,” he said, referring to the Depression-era President Franklin D. Roosevelt. “I think for a lot of people, they don’t necessarily understand the gravity of what polio actually is.”

It was still not clear exactly when or where the patient had contracted the disease, though health officials believe the person was infected by someone who had received the oral polio vaccine, which contains weakened live virus.

Such vaccines have not been administered in the United States since 2000, suggesting that the virus may have “originated in a location outside of the U.S. where O.P.V. is administered,” according to county officials. The oral vaccine is safe, but people who are unvaccinated can become infected if vaccine-derived virus is circulating in a community.

The Progress Against Polio

The highly contagious virus was one of the most feared diseases until the 1950s, when the first vaccine was developed.

County officials said the strain in question could be spread by those “who come in contact with stool or respiratory secretions, such as from a sneeze, of an infected person.”

The person exhibited symptoms about a month ago, according to Rockland County’s health commissioner, who said on Thursday that the patient had suffered from “weakness and paralysis.”

Mr. Backenson noted that only a tiny percentage of cases would develop into severe paralysis but that many of those infected with the polio virus would remain asymptomatic, which could make it difficult to detect to what degree the disease had spread.

“That’s probably the biggest concern: You may have a lot of people out there who may never have severe paralytic polio but could potentially be spreading it to others,” he said. “That’s the reason for the urgency.”

On Friday, Rockland County officials said that “the person did not travel outside the country during what would have been the transmission window,” adding that “up to 95 percent of people infected have no symptoms, which makes tracking down the transmission difficult.”

Mr. Backenson said the Rockland case had been discovered after state officials had raised the alarm about a different neurological disease — acute flaccid myelitis — which can cause polio-like symptoms in children and can lead to paralysis. In June, the department had distributed a notice about the disease to clinicians, asking them to be on the lookout for cases. The patient’s doctor then sent a sample to the state authorities, who — rather than finding A.F.M. — discovered polio.

County officials were alerted to the positive identification of polio by state officials and the Centers for Disease Control and Prevention on Monday night. The county is disclosing little personal information about the patient, though several local officials, speaking on the condition of anonymity because of patient privacy concerns, said that he was a man in his 20s and a member of the county’s large Orthodox Jewish community.

That community was also a nexus of a measles outbreak in 2018 and 2019, with hundreds of cases in the county and in Brooklyn, which is also home to many Orthodox residents. Rockland County’s rate of polio vaccination for small children is significantly lower than the rate for other counties outside of New York City, according to state data. (Misinformation about vaccines has circulated in the Orthodox community, although most Orthodox rabbis encourage vaccination among their congregants.)

The measles outbreak led to a new law, passed in June 2019, that ended religious exemptions for immunizations amid a heated debate in Albany, a dispute that presaged even broader fights nationwide over Covid vaccinations after the pandemic began in 2020.

In Monsey, Yechiel Teichman, 27, an Orthodox father of two young daughters, said he was alarmed by the news of the polio resurgence even though he and his daughters were vaccinated.

“It reminded me of elderly family members who are still suffering from the polio they had as children,” Mr. Teichman said, as he walked his girls, ages 2 and 4, home from getting a pizza. “I advise everyone to get vaccinated.”

Like other residents, Mr. Teichman also confessed to a sense of exhaustion and a lack of patience with talk of diseases, including the coronavirus and recent cases of monkeypox. Still, he said, “I worry a lot more about polio than Covid — polio could do a lot more damage.”

Layla Deutsch, 21, said that though she had grown up ultra-Orthodox, her parents had been sufficiently terrified of polio to have her vaccinated. However, many of her friends had not been vaccinated, leaving her worried and anxious.

“It’s a little bit freaky,” she said. “Anything could come up. We don’t know what’s next.”

Likewise, local elected officials said that the community and government response to polio should be as aggressive as possible.

“This can’t wait,” said Assemblyman Kenneth Zebrowski, a Democrat from Rockland, who said that he had been shocked to be informed of the polio case. “They need to be attacking this on white boards in a war room.”

Mr. Zebrowski, who has three children, seemed frustrated that his district was once again dealing with a disease, like the measles, that had seemingly been conquered by modern medicine, only to flare up again in an unvaccinated person.

“Are you going to be at risk if you take your kids to the mall?” he said. “We honestly haven’t had to worry about this for decades.”

Aron B. Wieder, a member of the Rockland County Legislature who is a Hasidic Jew, said he had been encouraged by the response of residents in his community, and he encouraged unvaccinated people to be inoculated as soon as possible. “This can save lives,” he said.

Once one of the world’s most feared diseases, polio was largely tamed using vaccines developed in the 1950s. The last known case of polio in the United States was in 2013, believed to have been brought in from abroad. The last case that originated in the U.S. was in 1979, according to the C.D.C.

For Mr. Messler, the immunization on Friday morning helped settle his mind, though he said the ongoing threat of various diseases had left him a little weary.

How We Mourn Covid’s Victims

What Flying Is Like for Passengers Who Use Wheelchairs

While many local residents use the hot and humid weather as an excuse to leave the DMV area this time of year,...
View Post
Health

WASHINGTON — President Biden on Wednesday signed into law a bill that expands medical benefits for veterans who were exposed to toxins from burning...
View Post

While many local residents use the hot and humid weather as an excuse to leave the DMV area this time of year,...
View Post