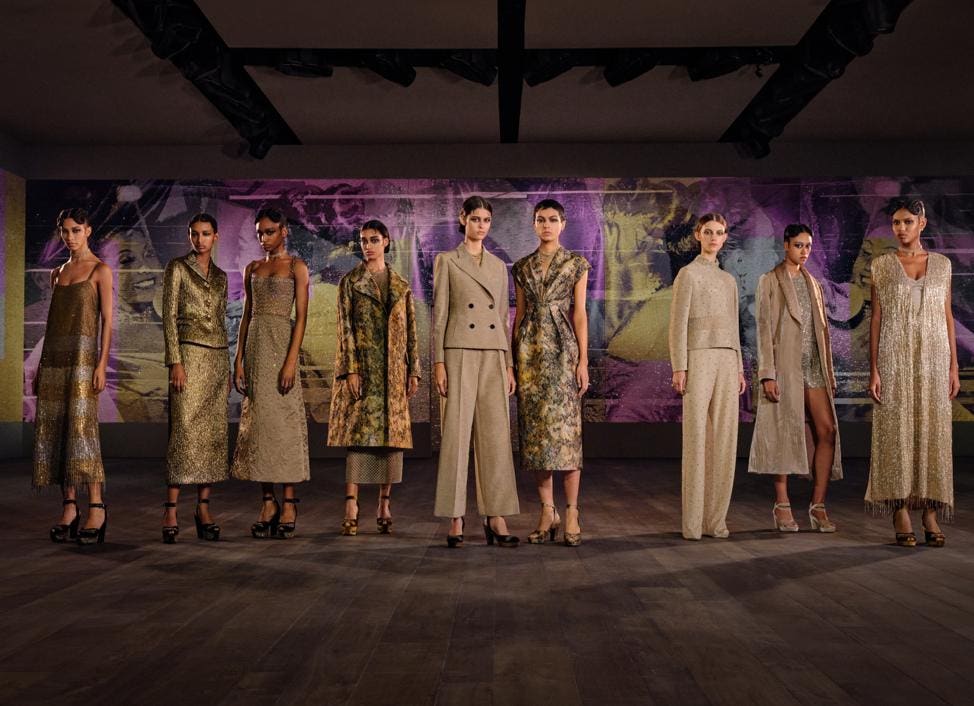 America in the 1920s was hostile to Blacks, so Joséphine Baker did what many blacks did and moved to places like Paris and Moscow to escape the harsh realities of Jim Crow laws, the Klu Klux Klan, and lynching. Dior creative director Maria Grazia Chiuri paid homage to Baker and other black and mixed-race women throughout history that, to put it simply: had it hard. Creating silhouettes that are likened to the styles Baker wore, Chiuri explored garment construction for the body.

Mickalene Thomas was behind the show’s staging. An African-American artist born in 1971, Thomas’s work tackles themes of femininity, power, challenging the male gaze, and celebrity. Doing mixed printed images, photographs, and paintings her work at the show highlights the importance of black and mixed-race women, figures most particularly who thought and acted differently. Putting images of women of color who broke barriers, women from Eartha Kit, to Nina Simone, to Dorothy Dandridge, Helen Williams, Parpessa Dawn, and Lena Horne just to name a few on the walls going around the runway. “She unveils the deep meaning of this collection and shakes up the vision of haute couture, the essence of fashion that can become a radical gesture of awareness of its own value and strength,” shares the Maison on Thomas in notes.

“These women have broken many barriers in television, film, fashion, and social activism. It is because of their determination and sacrifices that I am able to make this work and be the artist I am today,” she states.

Chiuri went to a place she rarely goes and that’s to an intimate lingerie look. Her cashmere evening coat embroidered with graffiti-moiré effect and jet tubes and staggered matching fringes over a black smocked satin swimsuit showed the relaxed style of Baker and how she dressed in her dressing room before going out on stage.

There are strong hints of the 1930s and 40s. You can just see the finger-wave hairstyles that would have oozed from that era. Baker, a renowned dancer left the US in 1925 for Paris. Perhaps the city being filled with artists, writers, and fashion creators appealed to her. For Dior, she represents a mixing of cultures and shared experiences that brought cabaret. Later obtaining French citizenship, Baker performed on large stages like The Strand Theater and Carnegie Hall, and often wore Dior herself.

Both Chiuri and Thomas were able to capture a group of women that were overlooked in many ways during their heyday, but somehow through photo images and garment construction were able to tell a story of the importance and significance of black women and mixed-race women.