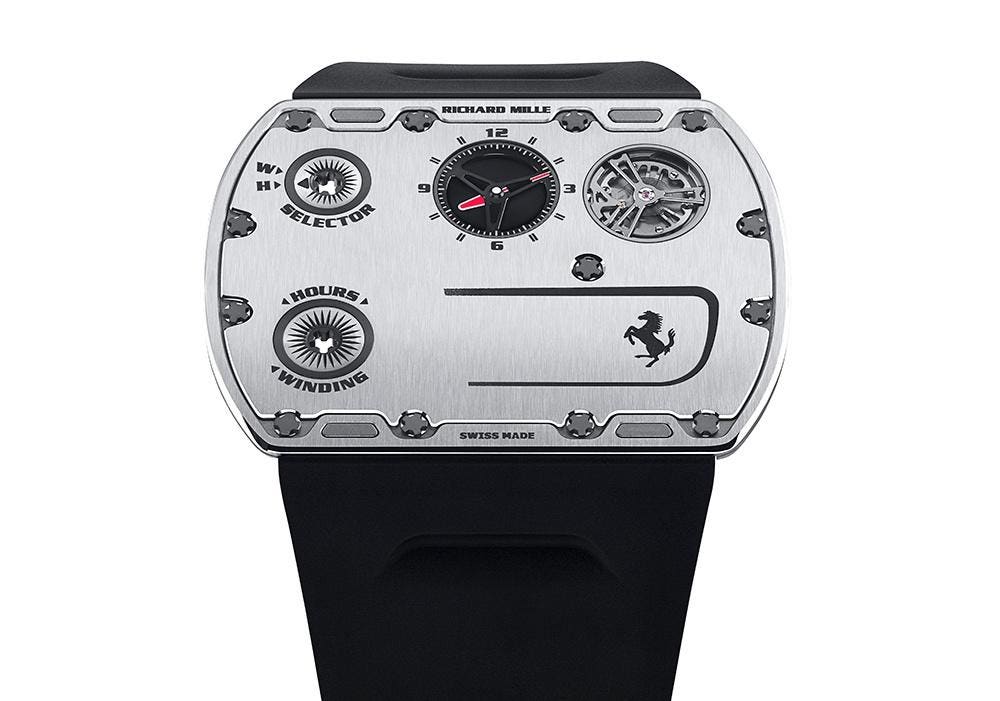 Well, this is a surprise. Anyone familiar with Richard Mille knows the design codes of this very distinctive brand are: huge dimensions, bold design and lots of color. The very monotone Richard Mille RM UP-01 Ferrari, on the other hand, sets a record for the world’s thinnest watch. It measures a mere 1.75mm thick. Previously Bulgari held the micro-watchmaking record, with its 1.80mm thick Octo Finissimo Ultra, introduced earlier this year.

In order to make the watch thin, Richard Mille’s tactic was to distribute the components across a large surface area rather than stacking them, as in a traditional movement. But micro-thin watchmaking is a challenge because the thinner you make the components and baseplate, the less robust the watch becomes. They solved this by making the baseplate and bridges out of grade 5 titanium, a particularly rigid alloy that includes aluminum and vanadium. It was extensively tested to make sure the watch was strong enough to withstand accelerations of over 5,000 g’s. “In terms of casing, watchmaking standards stipulate a minimum section thickness of 0.35 mm in certain places. However, we are sometimes at 0.18 mm of material here,” says Julien Boillat, Richard Mille’s technical director of cases and exteriors. “Extensive laboratory testing was necessary to ensure the components offered the needed strength despite this reduction in material at strategic points such as the caseband and caseback.”

The stability of the escapement is another challenge, so Richard Mille developed a patented ultra-flat balance wheel for its new caliber RMUP-01 that is also made of titanium. The newly developed movement was reconfigured to combine some functions together, thereby reducing the total number of components – including the winding stem. They also used an extra flat hairspring, which maintains a 45-hour power reserve. The function selector, winding crown, time subdial and balance wheel/hairspring are all displayed on the same plane on the dial, with space left over for the Ferrari’s prancing pony logo. The sapphire crystal over the hour dial and the regulator was reduced to a thickness of 2-tenths of a millimeter. “Like Ferrari, which continuously seeks to gain another few thousandths of a second while racing, we fought to shave off the last hundredths of a millimeter to achieve the flattest possible watch. But those last dozen or so micrometers were hard won in a long and arduous process,” says Yves Mathys, head of production for Richard Mille.