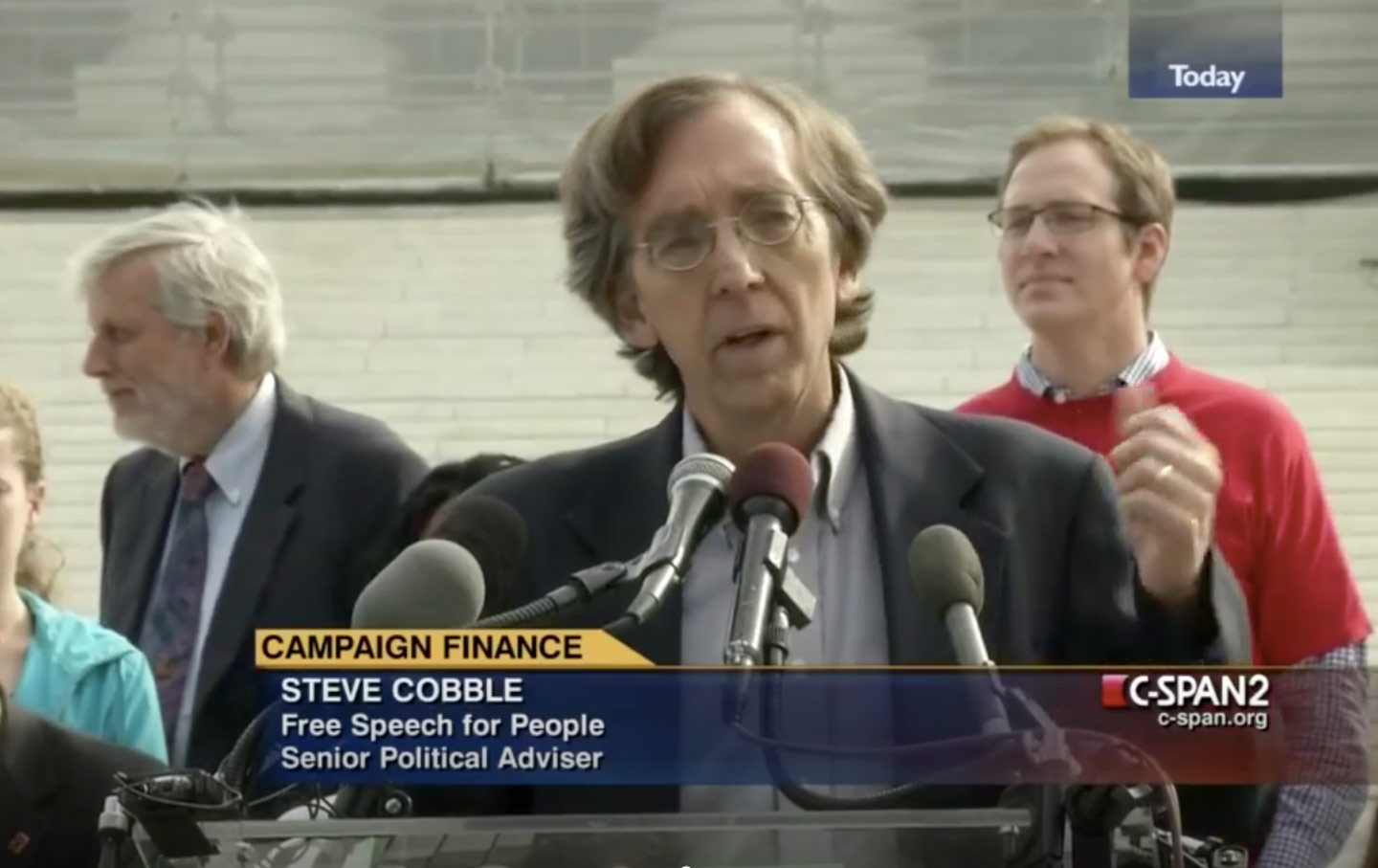 Steve Cobble was hailed as a political genius for his historic interventions on behalf of candidates from George McGovern to Bernie Sanders. Yet Cobble, who died Friday at age 69, always said he was just a long-haired student radical who turned to politics because he thought it might be the best way to stop wars and dismantle the military-industrial complex.

“I went off to college to be a National Merit Scholar in mathematics and the Vietnam War came along, and I didn’t like it much,” Cobble explained with typical understatement when the Harvard Kennedy School’s Institute of Politics invited him to speak on the definitional role he had played in American presidential politics. “I don’t know whether it brought my politics out or created them, but it brought me into protest politics and it brought me into electoral politics.”

Professors, students, and political insiders had gathered on a winter day in 1990 to hear from the master strategist for the Rev. Jesse Jackson’s “Rainbow Coalition” presidential bid of two years early. They wanted to know Cobble’s secret. Instead, the math whiz who gave up slide rules for delegate counting offered the crowd a corollary.

“Political experts are made, they’re not born. To prove that, I guess, I’ll offer you an example of how I became an expert,” he began. “I was in New Mexico: an anti-war activist in a kind of a boondocks town with an ag college. It was the kind of place where, when we demonstrated, we were glad the police were there—because there were more cowboys than hippies, or whatever, and we needed their protection. My standard look in those days was: hair down to [below his shoulders], John Lennon glasses, the work shirt—not that I did any work—the blue jeans, the thread belt and the headband.”

One Sunday morning in early 1972, Cobble got a call from the state organizer for George McGovern’s presidential campaign. A history professor had recommended the student activist as a potential coordinator for the campaign in the state’s second-largest county, and Cobble agreed to meet the grizzled political veteran at a local hotel. “I walk in. I’m 20 years old. Idealistic. Untested. A self-proclaimed radical. A terrifying sight to grandmothers everywhere. In short, I was his worst nightmare walking through that door,” recalled Cobble, with the leisurely good humor that was his superpower. “But he was desperate, and I was naïve. McGovern was at about one percent in the polls then, he couldn’t be too choosy. So we agreed to give it a try.”

“I was sure McGovern didn’t have a chance,” Cobble explained decades later. “My purpose in doing this was the strategic one of getting enough delegates [to force the party’s eventual nominee] to take a stronger anti-war platform position at the convention. That was my goal in the whole thing.”

To the surprise of the 20-year-old coordinator, and just about everyone else, McGovern won the county, the state, and the Democratic nomination. Cobble went to the convention as one of the youngest delegates in the history of American politics. ”I was now a, quote, genius, unquote.”

‘We Lost a Giant’

Cobble always presented himself as an accidental “expert.” But the progressive stalwart really was, as Texas populist Jim Hightower said, “a helluva strategist.” A pioneering advocate for building intersectional campaigns that were as much about issues as they were about candidates, Cobble guided unlikely contenders to unexpected victories and developed strategies that took “protest politics” from the streets to the campaign trail. “He was a proud champion of the movements of the 1960s and what they did to change America, and he never gave up on the dreams of freedom and justice which stirred millions of people to wake up America in the civil rights and peace movements,” recalled Representative Jamie Raskin. The Maryland Democrat described Cobble as “a hardcore practitioner of grassroots electoral politics who urged progressives not just to dream big but to organize seriously and systematically in order to win.”

The news that Cobble had died inspired an outpouring of love and solidarity for a man who devoted his strategic brilliance not to achieving fame or making money but to waging the campaigns of “people struggling for a kinder and gentler world.”

“We lost a giant,” said the Rev. Jesse Jackson, who credited Cobble with developing strategies for winning the delegates who helped his 1988 presidential bid begin a process of transforming the Democratic Party that continues to this day. Yes, Cobble was “a keen strategist,” Jackson said. But he was, as well, a “beloved brother” in the decades-long struggle for a more just and peaceful world.

Former Ohio representative Dennis Kucinich, the anti-war Democrat for whose 2004 and 2008 presidential campaigns Cobble served as a senior strategist, called the strategist “a brilliant, visionary architect of political movements and campaigns, including mine.”

Cobble, a frequent contributor to The Nation, was a constant campaigner for the movement politics that challenged the Democratic Party’s centrist caution—from the McGovern race in 1972, through the Jackson runs of 1984 and 1988, to the groundbreaking “Draft Bernie” campaign he assembled to convince Vermont Senator Bernie Sanders to seek the Democratic presidential nomination in 2016. In 1982, Cobble helped New Mexico elect one of the most progressive governors in American history, Toney Anaya. In 1992, Cobble served as political director for the campaign that convinced Illinoisans to send the first Black woman to the US Senate, Carol Moseley Braun. He was, Reverend Jackson said, the “architect of hope” who negotiated the rules changes that opened up the Democratic Party’s nominating process, a change that opened up the party for the breakthrough candidacies of Barack Obama and so many others. Cobble traveled to South Africa in the early 1990s to run election training workshops for Nelson Mandela’s African National Congress. He was a fellow with the Institute for Policy Studies—the think tank that reflected his blend of rigorous intellect and righteous activism—and the Kennedy School; an adviser to constitutional reformers and impeachment activists with Free Speech for People; and the director of the Arca Foundation, a philanthropy in the forefront of funding democracy-expanding and democracy-building campaigns. He helped organize the National Rainbow Coalition and was the director of the Campaign for a Progressive Future. He counseled former House Judiciary Committee chair John Conyers and consumer activist Ralph Nader, who on Sunday hailed his old friend as the rare political strategist “who always believed policy preceded message.”

When Cobble walked into a room of candidates and consultants, he invariably took a place in the back. Slowly but surely, everyone who knew anything about politics worked their way over to the man they knew would have the most incisive assessment of the elections that mattered, the strategies that were working, the need for an intersectional politics based on the Rainbow Coalition model and the issues that could not be neglected. Becky Bond recalled that when she was a senior adviser to the 2016 Sanders for President campaign, “we would call him from the campaign trail and ask: How did you handle this dynamic in ’88?”

“People turned to Steve for two reasons. First, they respected that he knew how to get things done,” said Rainbow Coalition veteran Kevin Alexander Gray. “Second, they respected his values. He didn’t start talking about money or buying ads. He started with the principles, the ideas, the issues.”

The issue that Cobble always came back to was the one he started with: moving the Democratic Party and the country in an anti-war direction. He never stopped believing, as McGovern did, that America needed to “come home…from wars…and from military spending so wasteful that it weakens our nation.” That faith drew Cobble to campaigns with little chance of winning, and little to pay. He turned down offers from prominent contenders to stand at the side of those who were prepared to take money from the Pentagon to meet human needs.

It was never clear where Cobble’s professional life ended and his activism began. That’s how he liked it. Cobble devoted decades of his life to building movements that sought to stop wars and to hold accountable those who employed lies to start them. When the leaked “Downing Street Memo” revealed in 2005 that British Prime Minister Tony Blair was aware the Bush administration had manipulated “evidence” about supposed weapons of mass destruction when arguing for the invasion of Iraq, Cobble cofounded the After Downing Street Coalition, which demanded investigations and the impeachment of those who had lied about issues of war and peace.

Cobble took that message nationwide, appearing on C-SPAN, traveling across the country, and working with veteran activist Tim Carpenter to forge a permanent anti-war presence in the Democratic Party around the group, Progressive Democrats of America. Carpenter, who died in 2014, was famous for slapping “Healthcare Not Warfare” stickers on everyone who showed up at PDA events. Steve Cobble wore his proudly—along with his an old McGovern pin. “To paraphrase Jack Nicholson, America couldn’t handle the truth in 1972. Nor since, given that we still have an empire stretching across the globe,” he recalled. “But George McGovern didn’t give up… He kept on fighting to stop our endless wars. He kept on fighting to feed the hungry. He kept on fighting to get America to ‘come home.’” As did Steve Cobble.