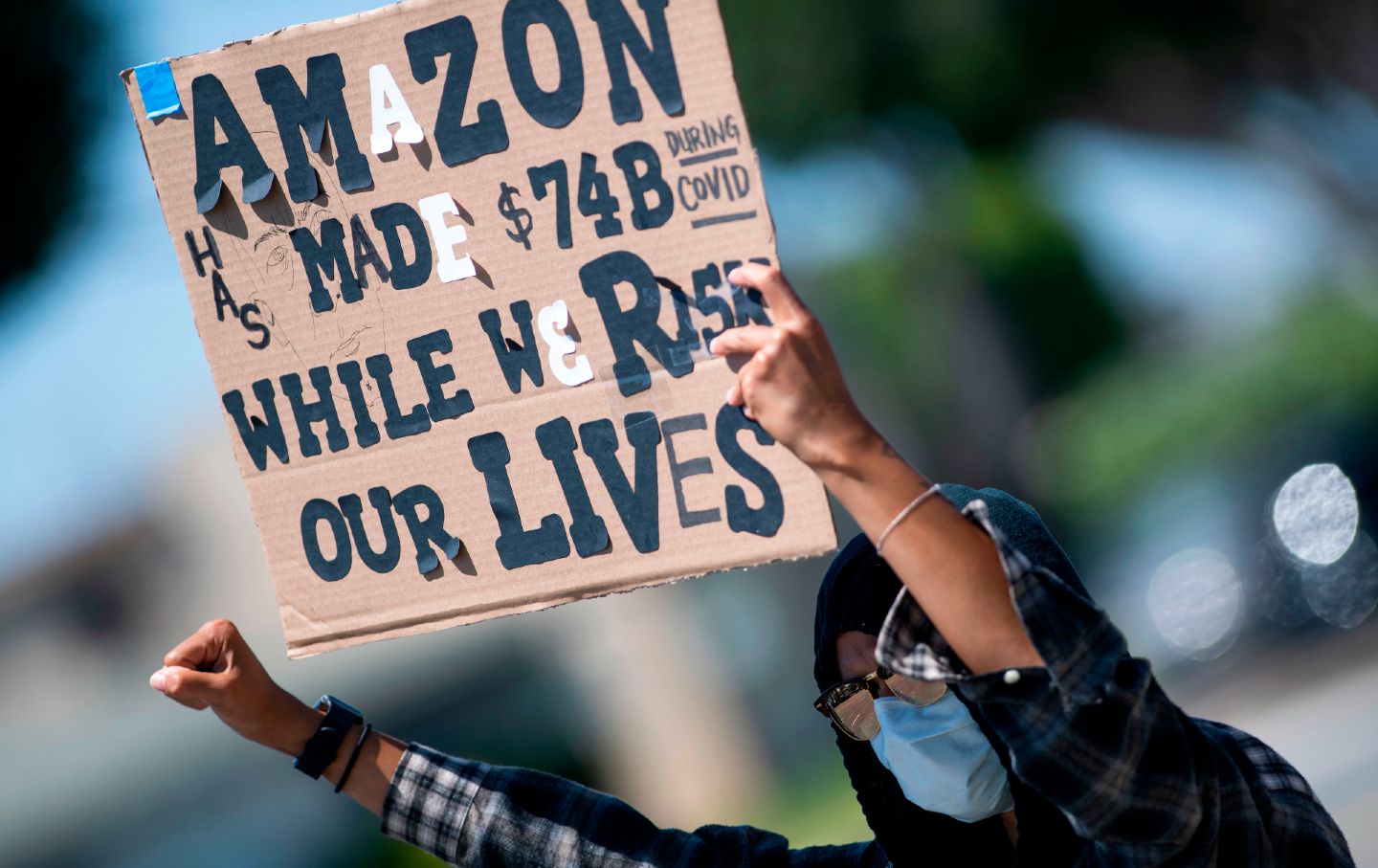 For the National May Day Walkout/Sickout on May 1, 2020, workers at the Amazon delivery hub in Hawthorne, Calif., protested their employers’ failure to provide adequate protections amid the pandemic. (Valerie Macon / AFP via Getty Images)

The organizing drive still underway by workers at Amazon’s fulfillment center in Bessemer, Ala., reveals some of the many ways our current labor law gives employers too much power to stand in the way of workers trying to gain a collective voice.

Workers at Amazon want a union to bargain better pay, safety protections, and dignity on the job. Instead of respecting its workers’ choice, what has Amazon done?

Earlier this month, in the wake of all this anti-union activity, ballots were mailed to workers at this fulfillment center, and workers are now voting on whether to form a union at their workplace. Ballots are due on March 29. How quickly we know the outcome depends on whether there are challenged ballots and other issues—it could be a day, or it could take longer.

There are many good reasons for Amazon workers to choose unionization, despite Amazon’s vicious anti-union campaign. Workers at Amazon and other companies have seen how, especially during the Covid-19 pandemic, unionized workers have been able to negotiate stronger safety protections, premium pay, layoff protections, and other important benefits. The evidence overwhelmingly shows that unionized workers have better safety, pay, health insurance, and retirement security than nonunion workers. Black workers with a union earn substantially more than nonunion Black workers—the same as for other workers of color. The pay gap for unionized women compared to men is much smaller than for non-union women.

Support for unions is higher than it has been in decades, particularly among young workers. Research shows that four times as many non-union workers want a union at their workplace (48 percent) compared to the percentage of workers who currently have one (12 percent).

Despite this overwhelming demand on the part of workers to have a collective voice on the job, current law gives employers like Amazon far too much power to interfere with workers’ free choice and thwart union organizing.

Earlier this month, comprehensive legislation—the Protecting the Right to Organize (PRO) Act—was reintroduced in Congress. The PRO Act would address many of the major obstacles that stand in the way when workers want to organize. It would prevent corporations like Amazon from interfering in the union election process, leaving these questions to workers and the National Labor Relations Board. It would ban the sort of captive audience meetings Amazon is conducting to scare workers. It would, for the first time, institute real penalties against companies and corporate executives who violate workers’ rights, so corporations like Amazon cannot fire activists like Chris Smalls (who organized a safety protest at an Amazon warehouse on Staten Island) and face no real consequences. And it would override state so-called “right to work” laws that financially harm and weaken unions.

Despite a Democratic majority in the House and Senate for the first time since 2009, and a Democratic president who promises to be the most pro-union president ever, already the doubters and naysayers have started to downplay the possibilities of winning the PRO Act’s passage, prompted in large measure by the obstacles posed by the Senate filibuster, which as currently practiced requires a 60-vote supermajority to pass major legislation.

But here are four reasons why the PRO Act should pass this year:

Finally, if President Biden uses his legislative prowess and puts some muscle behind getting the PRO Act passed—something President Obama failed to do with the last major effort at labor law reform—it will make an enormous difference in the prospects for passage.

And if after all of this, the Senate filibuster stands in the way of a majority vote, there can be no more powerful illustration of the need for filibuster reform.

For the Amazon workers in Bessemer and across the country—and the millions of workers who would form a union today if the law gave them a reasonable shot—it’s time to prove the doubters wrong and get the PRO Act passed this year.