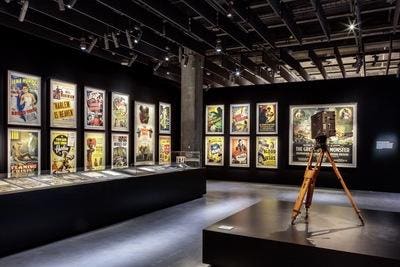 Regeneration: Black Cinema 1898-1971, the new exhibition currently on view at Los Angeles’ Academy Museum is a revelation, an education, a corrective to our blindered knowledge of American Film history and a lot of fun. It is superbly researched and curated with a wealth of artifacts intelligently installed and displayed, and really makes the case (if it even needed to be made) that the Academy has indeed launched a museum rather than merely a tourist attraction.

At the press preview, Academy member and Director Ava DuVernay said, “This work had to happen. It’s overdue.” What the exhibit makes clear, she said, is that: “We Black Folk have also been present in the history of film.”

Jacqueline Stewart, the Director and President of the Academy Museum spoke of its mission to tell “the many stories of Cinema” and to provide “many points of entry” with a “holistic commitment to inclusion.” Stewart added: “For a long time, the early days of Black film history were sidelined. Scholarship in this area was unknown to most film fans. And so, I am deeply proud that the Academy Museum of Motion Pictures — a premier destination for film lovers around the world — is now home to ‘Regeneration.’”

The exhibition’s co-curators Doris Berger, VP curatorial affairs at the Academy Museum and Rhea Combs, director of curatorial affairs at Washington DC’s National Portrait Gallery have spent the last five years working on the exhibition. I well recall an event several years ago on the roof of the nearby Peterson Auto Museum when the Academy Museum was still under construction where Berger first announced this as one of the Museum’s first exhibitions. At the time, I imagined a more historical survey of the work of early Black filmmakers such as Oscar Micheaux. Instead, what we have is no academic exercise but the opening to a world of filmmaking that was itself segregated – made during the years of racial segregation in this country – and that was made by Black filmmakers with black casts and shown for Black audiences in Black segregated theaters and venues.

Why 1898 to 1971? Well, because 1898 is the date of a remarkable piece of film, uncovered in 2017 at USC, which shows two Black actors, a man and a woman, embracing on screen, the earliest on record; and 1971 because that is generally when Black Cinema, or Blaxploitation films, began their heyday.

The exhibition, which takes up the entire fourth floor of the museum, begins with the recently recovered and restored 1898 film clip, “Something Good – Negro Kiss.” It is a joyous 30 seconds featuring vaudeville actors Saint Suttle and Gertie Brown in a playful embrace that is the first record of Black Actors kissing on screen – and which can be seen as an answer to the 1896 Edison film “The Kiss” that featured the white actors May Irwin and John Rice re-enacting their kiss from the NY stage play The Widow Jones.

The tenor of the exhibition is very much the tone of the Academy Museum – neither denying nor avoiding controversy, but always doing so in ways that are celebratory of positive achievements. This is a difficult line to walk successfully – some may feel the exhibition is too tame. Here, there is less emphasis on the prejudice, bias, stereotyping, and cruelty faced by Black Actors and more on what they nonetheless achieved even if their stories remained untold until now.

When you enter the first rooms, the curators have cleverly used contemporary American artists to add another level of commentary such as Glenn Ligon’s Double America, and Kara Walker’s Civil-War-seeming decoupage silhouettes on the wall. Doing so also signals that we are in a museum, and we are seeing art that is offering commentary on the Black Experience in America

There is a display case devoted to D. W. Griffith’s “Birth of a Nation,” a film heralded for its groundbreaking camera techniques and filmmaking, but that society was slow to condemn for its racism and proselytizing on behalf of the Klu Klux Klan.

The exhibition unfurls across seven exhibition rooms, with displays devoted to celebrated vaudeville performers such as Bert Williams and George W. Walker, and there is even a tin of the makeup used for “blackface.” There are materials devoted to so-called “race films” made with black casts for black audiences by black filmmakers and shown in segregated theaters (mostly across the South) between 1910 and the 1940s.

There is an entire wall of Hollywood legends including Dorothy Dandridge, Paul Robeson, Duke Ellington, Sydney Poitier, Harry Belafonte, and Diahann Carroll/ As well as two walls of Movie posters many of them for those films that were the precursors to the Blaxploitation films of the 1970s. The exhibition is filled not only with stellar research but also discoveries such as Reform School, a 1939 film starring Louise Beavers that was thought lost, but which the Academy has restored.

There is also a “soundie” machine, an early video jukebox of sorts that shows a series of eight three-minute musical films, with performances by among others, Louis Armstrong and Cab Calloway, Among the artifacts exhibited is Lena Horne’s sequined dress from Stormy Weather, One of Louis Armstrong’s Trumpets, Sammy Davis, Jr’s suit from Porgy and Bess, and tap shoes from the Nicholas Brothers.

What comes through loud and clear is that there have always been people of color above and below the line, participating in the Dream factory where America minted so much of its self-image.

When the Academy Museum opened a year ago, there was a great deal of criticism that although the museum made significant efforts to highlight the contributions of women and BIPOC minorities yet given scant acknowledgement of the role of Hollywood’s founders who as Jews were, in overwhelmingly immigrants or the children of immigrants and members of a persecuted ethnic minority. The criticism was well founded, and the oversight acknowledged publicly.

I can understand how some might feel this exhibition continues in the same vein making the point that, as far as the Museum is concerned, to quote David Baddiel, “Jews Don’t Count.” I agree that the Museum in its permanent and even temporary exhibits has more work to do in recognizing and stating the Jewish contribution to moviemaking, and in exploring and explaining the who and whys of it all. However, the story of Jewish Hollywood is known and has been written about many times. There is, of course, Neal Gabler’s landmark An Empire of Their Own, to give one prime example – and I’ve written on this topic many times.

By contrast, the story of Black Cinema 1898-1971 was not known even to contemporary Black Filmmakers such as Charles Burnett (To Sleep with Anger) who, at the press preview, talked about what a support such knowledge would have been to his career. The Museum has also published an illustrated catalogue that will surely be a touchstone for filmmakers going forward. There is concurrent educational programming as well as a series of related screenings.

The Academy Museum makes the case that the history of cinema has never been fully told; and that hiding in plain sight were the contributions of Black artists before and behind the cameras. This is not an exhibition that lays blame but that calls upon us all to see a wealth of talent that has existed but that, until now, we didn’t know.