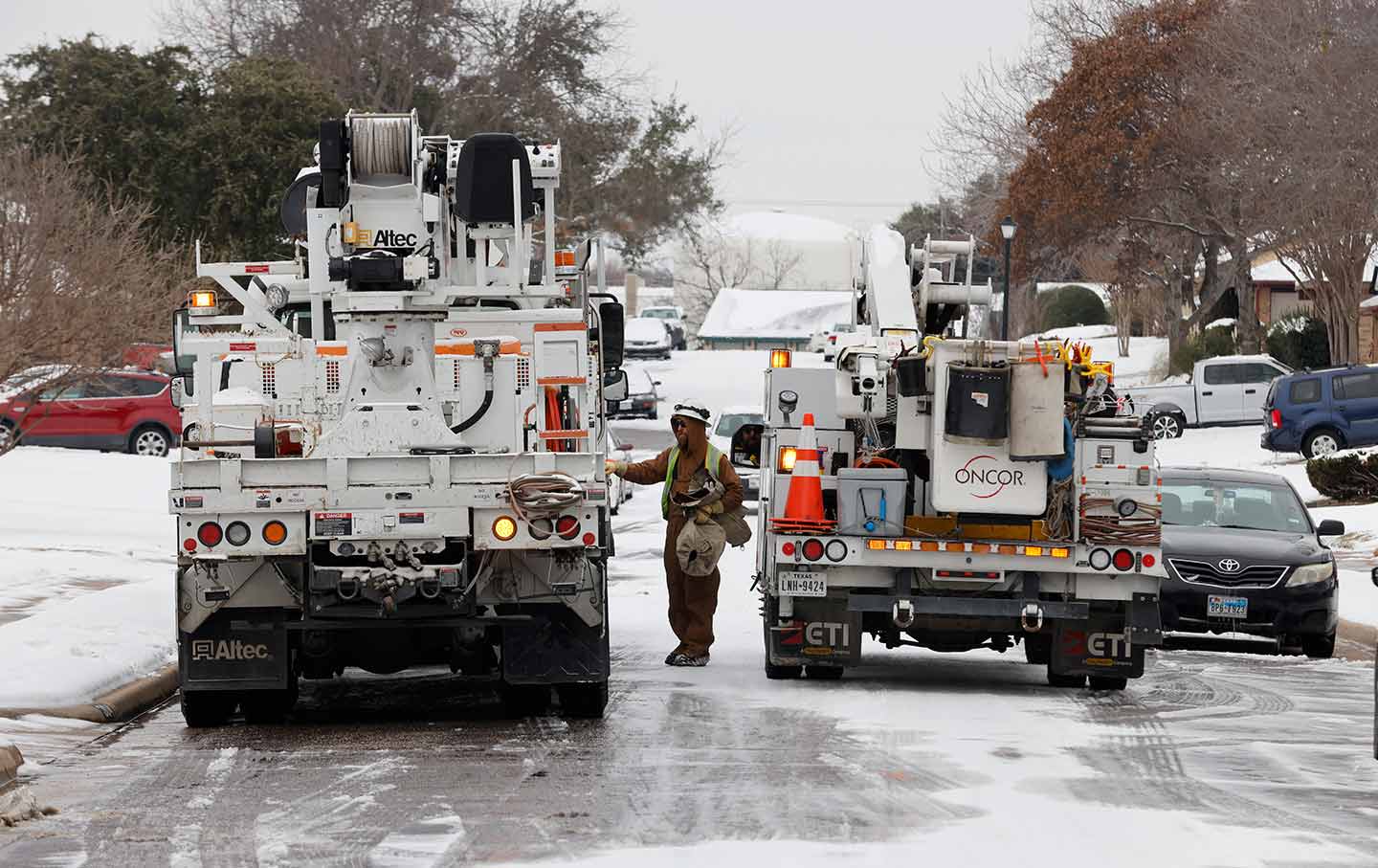 Millions of people across Texas have now spent as many as five days without electricity and water, thanks to a blast of Arctic air that plunged much of the Southern Plains into bone-chilling temperatures and overwhelmed the state’s power grid. The reasons the system failed are complex, though that’s not the impression you’d get from Fox News anchor Tucker Carlson and other conservative politicians and media personalities, who’ve spent the week blaming one particular scapegoat: wind turbines.

Carlson, the most-watched anchor on cable news, claimed Monday that a “reckless reliance on windmills” caused the grid failures. “The windmills failed like the silly fashion accessories they are, and people in Texas died,” Carlson said. In the days since, windmill hysteria has ping-ponged across conservative media, with various commenters and politicians framing the crisis as a dire warning about the folly of renewable energy. “This shows how the Green New Deal would be a deadly deal for the United States of America,” Texas Governor Greg Abbott told Fox’s Sean Hannity. “Our wind and our solar got shut down, and they were collectively more than 10 percent of our power grid, and that thrust Texas into a situation where it was lacking power on a statewide basis.”

Ten percent is, of course, not very much. And in reality, wind energy accounts for very little of the crisis in Texas. Some wind turbines did freeze. But it wasn’t just that one part of the electrical grid that failed—the entire system was unprepared for the extreme weather, which caused demand to spike (as people needed more energy for heat) and throttled supply, as gas wells and pipelines froze, and power plants shut down because of the cold. Coal and natural gas account for for more than 80 percent of the state’s power capacity, and as Princeton University energy systems engineer Jesse Jenkins has documented, failures related to those sources of energy accounted for a far more significant share of the problem than did frozen turbines. Roughly 40 percent of the capacity that the Electric Reliability Council of Texas, which oversees the state grid, was depending on from thermal sources (gas, coal, nuclear) simply wasn’t available. If there’s one primary culprit, according to ERCOT, it’s natural gas providers. In The Texas Tribune, Michael Webber, an energy resources professor at the University of Texas at Austin, described the failures of the natural gas industry as “spectacular.”

Particular features of Texas’s grid may also have made it more vulnerable to the extreme weather. To avoid federal regulation in the 1930s, Texas formed a system independent from the two major grids that serve the rest of nation, meaning that it can’t draw from its neighbors during an emergency—though that may not have helped in this case anyway, since much of the surrounding region is also experiencing high demand due to the weather. More significant is the fact that Texas deregulated its electrical system in a way that promotes fierce competition between power suppliers. That pushes prices down for consumers, but it also discourages investment in maintenance and winterizing measures (like insulating pipelines), which the state has left largely voluntary. “It’s like not taking care of your car,” Ed Hirs, an energy fellow in the Department of Economics at the University of Houston, told the Houston Chronicle. “If you don’t change the oil and tires, you can’t expect your car to be ready to evacuate, let alone get you to work.”

If you had been watching Fox News, however, you’d be under the impression that Texas is some kind of green-energy experiment gone horribly awry. “Texas gets a taste of Dems’ radical climate vision,” read one Fox chyron. “Winter storm cripples Texas’ green energy grid,” claimed another. Carlson went as far as to say that the state had become “totally reliant” on windmills. Various Republican politicians joined in the scapegoating, including Senator Ted Cruz, Senator John Cornyn, and Representative Dan Crenshaw, all of Texas and who collectively received more than $1.1 million from the industry in last election cycle, according to Gizmodo.

Senator Steve Daines, a Republican from Montana, shared a viral photo purportedly of a helicopter deicing a turbine in Texas, though it was actually taken several years ago in Sweden. Breitbart piled on, as did commenter Dan Bongino, and the more patrician voice of The Wall Street Journal’s editorial board, which blamed a “growing reliance on wind and solar” for the grid’s failures (though the paper’s own reporting contradicts that claim) and concluded, “the Biden administration’s plan to banish fossil fuels is a greater existential threat to Americans than climate change.”

But what’s happening in Texas is not an indicator that renewable energy is less reliable, or that climate change is insignificant: It’s a signal that our infrastructure is frighteningly unprepared for the kinds of extreme weather events that are driven by climate change. As Representative Alexandria Ocasio-Cortez put it, it is “quite literally what happens when you *don’t* pursue a Green New Deal.” Research suggests that warming in the Arctic is destabilizing the jet stream, allowing the polar vortex to shift southward. While there’s still uncertainty as to the extent to which climate change is responsible, unexpected deep freezes in places like Texas are just one in a long list of extreme weather events expected to destabilize energy grids and other critical infrastructure affecting transportation, housing, communications, water, and other basic systems.

Just six months ago, our screens were filled with otherworldly photos of tangerine skies and clouds of smoke, as wildfires engulfed much of the West Coast. Now the photos are of icicles dripping off a ceiling fan in the hallway of an apartment building in Dallas. Juxtaposed together, these images sum up the “new earth weather” we have to contend with. Making our infrastructure more resilient is possible, but it will require significant investment from lawmakers. In addition to demonstrating the real human costs in failing to adequately prepare for extreme weather, the Texas crisis also illustrates one of the greatest barriers to doing so: a right-wing media ecosystem and a Republican Party more committed to absurd culture war narratives than to governance.

We Need a Civilian Conservation Corps

The serious lower leg injuries Tiger Woods sustained in a car crash on Tuesday typically lead to a long and perilous recovery, calling into...
View Post