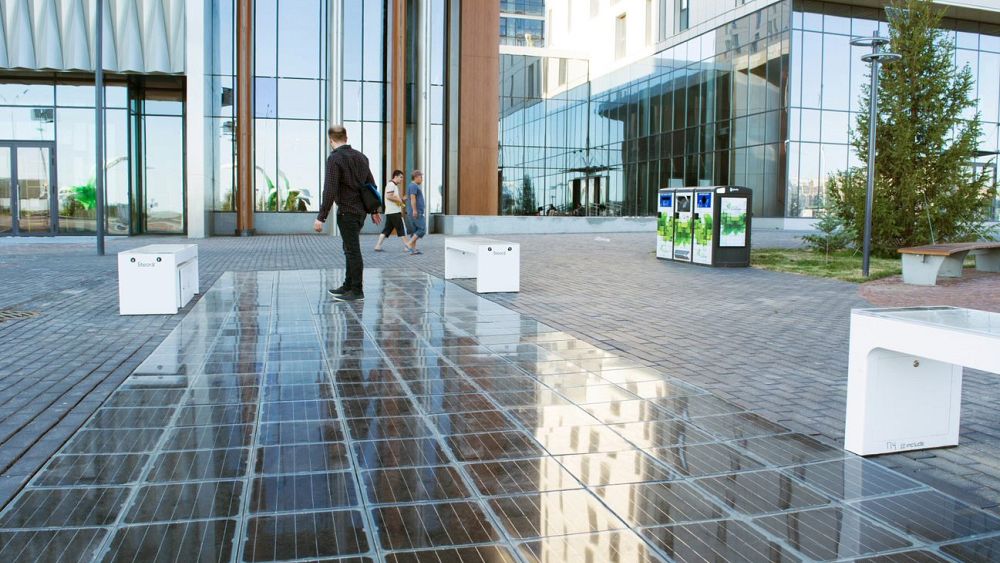 A company called Platio makes solar panels out of plastic waste – and then uses them as pavements.

Based in Hungary, the team can power buildings and electronic devices through people’s footsteps. The more you walk on the solar panels, the more they generate energy.

The pavements deliver solar energy “to places where it was not possible before,” says co-founder of Platio, Miklós Illyés.

Illyés is one of the three Hungarian friends who came up with the idea back in 2015.

So how does it work?

By employing a special pressuring method, Platio can make use of otherwise non-recyclable plastic to build the bricks that the solar panels sit on.

The company says it uses the equivalent of 400 plastic bottles to make one square metre of solar pavement. It claims this mixture makes for more durable bricks than some other materials in the road building industry.

And although it’s meant for humans rather than vehicles, the pavement can “easily carry the weight of even a heavy truck,” reassures Illyés.

It took a few years, but now the product is available in 36 countries.

“Our product is not made to replace the traditional solar panels on the roof, for example, but to be a complementary effort to use clean energy where other energy resources are not available,” says Illyés.

“It is very interesting that in the USA, for example, there are some places in the southern states where due to tornado threat it is difficult to install a solar panel. And if we can install solar panels in these places, we can also increase green energy production.”

One solar panel unit provides about 20 Watts of energy. And a 20-30 square metre surface can provide enough energy for a family home in a Hungarian climate.

What is ‘extractive tourism’ and what can we do about it?

The term ‘overtourism’ has become the go-to expression to describe mass tourism, particularly for places underprepared for influxes of visitors.Facilitated largely by the advent...
View Post