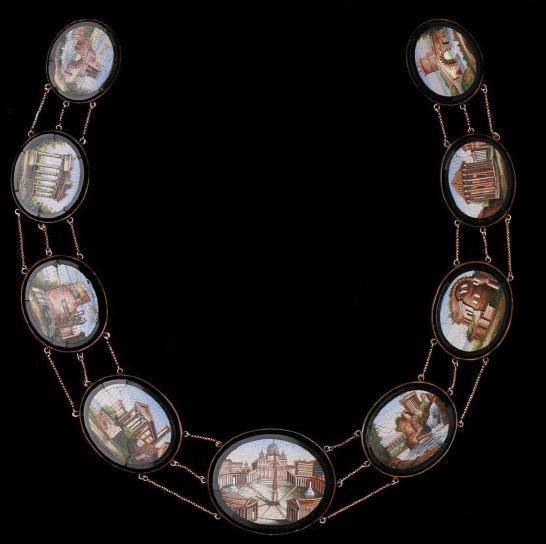 Pick up an expresso and join along for a day of touring the best permanent exhibit, renowned shops and antique and vintage jewelry in the eternal city. You have to get one night’s sleep, eat and have an end-of-day drink and we suggest places for those as well. Let’s start the journey…

Staying in central Rome can cost a small fortune and eat into any funds you have set aside for purchasing a piece of jewelry—there are beautiful hotels but I recommend staying at Roman Holiday Residenza, a super host on all of the Airbnb sites. (And yes, it is named after the beloved classic and iconic movie) The price is right and the location is perfect, situated between Piazza Navona and Campo Fiori. It’s a respite of a sleek, ultra-modern metropolitan-style luxury apartment in the heart of the historical ruins of Rome—bright, quiet, and large with light streaming through the window and completely renovated- with a safe to keep your treasures when you find them. There are a slew of other amenities like a washer/dryer but let’s get to the jewelry.

Once you walk out the door, you should stop at Roscioli Caffe for one of the many delectable looking pastries and a cappuccino or the Italian caffeine jolt of your choice and call an uber or cab to your first stop. This is the only place you cannot walk to from central Rome on this jewelry tour.

The National Etruscan Museum at Villa Giulia in Rome

The National Etruscan Museum of Villa Giulia in Park Borghese (Piazzale di Villa Giulia 9) is where you can find the permanent collection of the legendary Castellani jewelry divided int0 different periods and displayed next to original pieces of ancient times. The Castellani family were part of the cultural fabric of Rome ever since Pio Castellani opened his workshop in 1814. He had two sons, Alexandro and Augusto. They were part of the business of collecting and re-imagining the Etruscan details and techniques as well as other elements and intricacies of archeological jewelry. The artisan family found their own way to recreate the enameling, micromosaics, granulation and goldwork and were leaders in the revivalist movement of the 19th century. Quoting the historian and author Geoffrey Munn, “No nineteenth century lady of fashion visiting Italy would consider her tour of Rome complete without calling at Castellani’s shop near the Spanish Steps to acquire one of the famous pieces of Italian archaeological jewelry offered there.”

Castellani pieces were smuggled out of Villa Giulia in 2013 and then rescued and brought back to the museum.

Eventually, the family opened their own shop in London during that period. Augusto’s son Alfredo closed the workshop in 1927, and antiquities were donated to the Villa Giulia museum. More Castellani creations went to the permanent display with their ancient pieces in a new well-lit installation mounted at the Villa Giulia in 1999. The collection is mesmerizing and should not be missed, even though it is a trek from where you want to go next.

At Bruschini Tanca Antichità, a pair of gold earrings made from micromosaic plates depicting a butterfly on the top and a dove in the nest on the underside. Roman manufacture between the end of the 18th and the beginning of the 19th century. 1790-1805 ca, in the style of Giacomo Raffaelli

Make sure to stay hydrated, and bring bottles of water as you continue your jewelry tour—the next stop you will want to make after Villa Giulia is Bruschini Tanca Antichità. This museum quality antique shop specializes in late 18th and 19th-century jewelry and features other periods as well. There are precious and unique objects indigenous to Italy and the travel souvenirs of foreign tourists who visited during Grand Tour during the 19th century. Pieces included micromosaics of the famous site of Rome—a favorite of the shop’s selection. The store is owned by third-generation antique dealers Ciara and Francesco Bruschini Tanca. (Via dei Coronari, 8 and Via dell’Arco della Pace, 16) a stone’s throw from Piazza Navona.

At Bruschini Tanca Antichità, a 14K gold heart-shaped pendant with over fifty rose cut diamonds set on the front of the pendant. The back engraved with floral motifs. The attachment for the chain or ribbon in the form of a dove with four small diamonds and a central ruby. Turkish manufacture for the European market, from the end of the 19th century to the beginning of the 20th century.

At Bruschini Tanca Antichità , a pair of long earrings in gold and coral: the upper part in coral engraved with chiseled gold leaflets, under a bow of leaves with a coral button and central pendant surrounded by branches and gold leaves. Manufacture of southern Italy, Sciacca, Sicily, early 19th century. Circa 1820-30.

In Rome, stores close down from 3:00 PM To 5:00 PM, which is a perfect time to walk on over to Rome’s version of Greenwich Village—Trastevere for authentic Roman thin crust pizza and some of the best gelato in the city. It’s a charming part of Rome and you will get back on track after a quick lunch and dessert. Dar Poeta’s pizza at Vicolo del Bologna 45 , with its slow-rising crust and perfect ratio of cheese, to fresh tomatoes is often super crowded but worth the wait. Try any of the pizzas depending on the toppings you like; the Margherita pizza is always a best bet when you don’t want to fill yourself with too many ingredients and want to taste the freshness and flavorful goodness of the simple ingredients. Always ask for mozzarella di bufala as a fresh topping. Then for a quick desert in spring and summer months, you can take a short walk to Otaleg –gelato spelled backward for a mouthwatering and hard-to-choose- array of chocolate, vanilla, coffee-based or fruit-based gelato.

Now it’s time to get over to Piazza de Spagna and the legendary jewelry shop Bulgari. You can walk across the Tiber for approximately one-half hour until you get to the Spanish Steps. Sit on the steps with other tourists, down some water and head over to Via Condotti 10, where Bulgari has been situated since it opened this space in 1905.

If you haven’t been to Bulgari since 2014 then you are in for a real treat—that is when the legendary shop was refurbished for its 130th anniversary. Renowned architect Peter Marino restored the travertine stone slabs, the green African marble cornices and the bronze letters above the entrance doors. Inside there are designated spaces for bridal, high jewelry, the VIP room and a museum of the heritage pieces. Marino added back the side door that led to where celebrities like Elizabeth Taylor, Richard Burton, Audrey Hepburn and others snuck out to avoid the press. The Elizabeth Taylor room, which was once named after her, has been refurbished. Photos of her and other celebrities grace the walls of each room. Perhaps the most captivating aspect of the shop is the top floor museum, which is dedicated to the heritage jewelry, much of which Bulgari bought back at auction from the famous people the shop once sold. Upon entering and leaving the shop, the staff makes you feel like a celebrity or royalty, lending magic and glamorous history on the busiest shopping street in Rome.

The Eden enchantment necklace design is inspired by a Bulgari necklace from the 1930s, featuring a double festoon structure offset perfectly by the thick, diamond-set chain on the back.

Time to take in some world-class antique and vintage jewelry at the internationally known shop Eleuteri.

Dating back to 1894 Carlo Eleuteri’s father Pietro opened a café near the Spanish Steps, which Carlo was involved for some time but then branched out on his own to specialize in vintage jewelry. Today, Eleuteri attracts Italian aristocracy, fashion designers and international collectors and is known as Italy’s primary vintage and antique jewelry destination. The shop specializes in signed pieces by Bulgari, Cartier, Van Cleef & Arpels, David Webb, George Fouquet, to name a few. It also boasts a selection of 18th-century coral pieces from southern Italy and represents various European periods in rare antique and vintage jewelry. Eleuteri lends its jewels for exhibitions held at prestigious institutions such as The Royal Academy of Arts in London, The Musée d’Orsay in Paris, The Fortuny Museum in Venice, la Venaria Reale of Turin, the American Museum of Natural History in N.Y. and The Bulgari Museum in Rome, among others. The historic flagship shop is at Via Condotti 69, only a few steps from Bulgari and is filled with treasures you won’t want to miss.

It’s time for an aperitivo so head over to Hotel De Russie at Via Del Babuino 9 and sit outside the Stravinskij Bar. It is surrounded by lush trees, botanicals and tranquil fountains and is at the foot of Hotel de Russie’s Secret Garden. While you sip your prosecco, you can mull over the jewelry you have seen. You might envision yourself as one of the 19th Century Grand Tour travelers –who wouldn’t leave Rome without a jewel as a souvenir or recuerdo, a word written on jewelry during that period and translates into memories or remember. So go ahead and splurge on an antique, vintage or Bulgari piece that will endure in your collection and be an everlasting memory you can pass along to future generations of a day touring some of the best jewels in Rome.

Here are some photos of our stops along the way