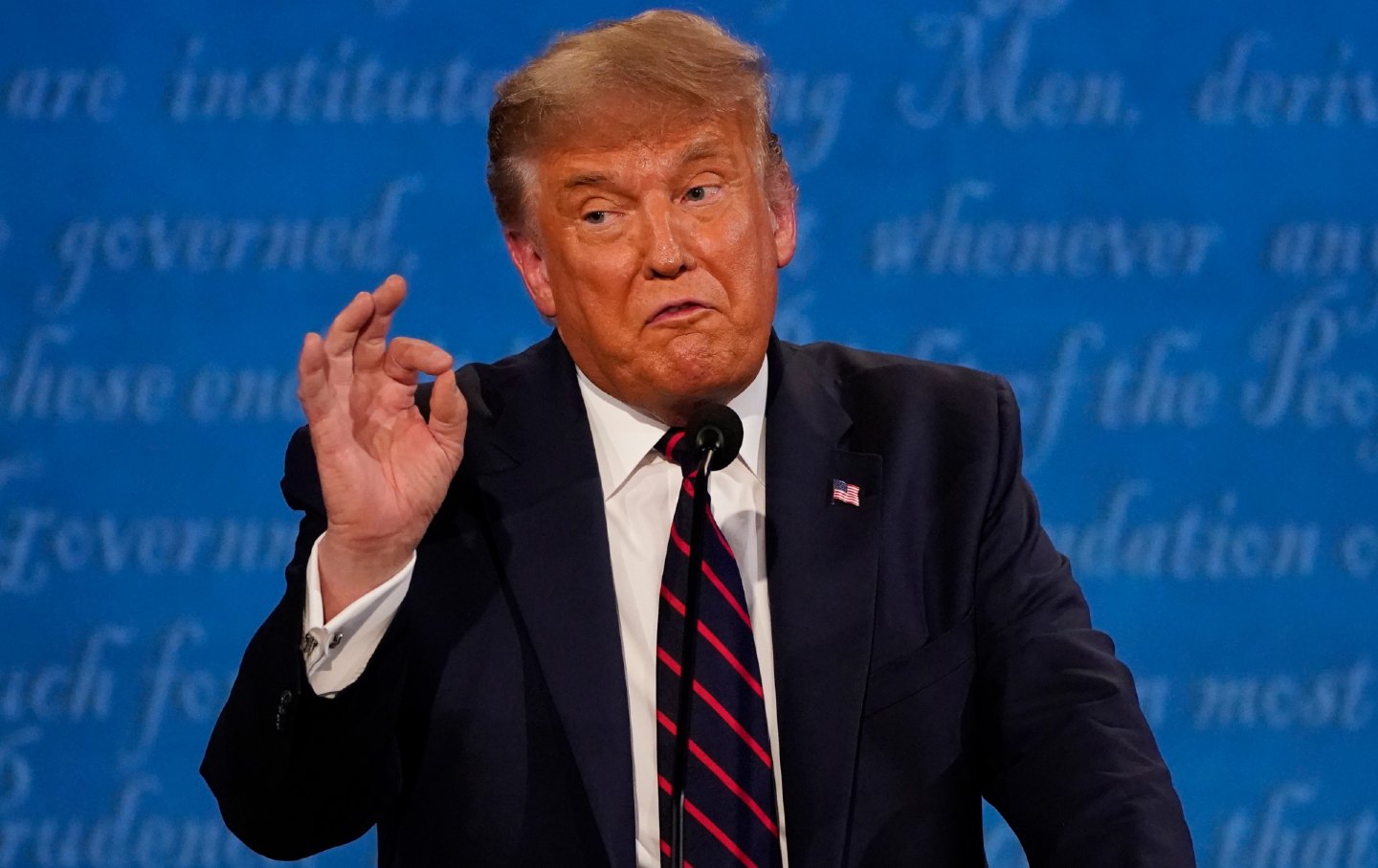 I’m not in the habit of quoting John Birchers, but I’ll make an exception today. In 1964, the far-right author John Stormer published a book, None Dare Call It Treason, detailing how and why he believed a vast Communist conspiracy had infiltrated all levels of the US government.

The book was balderdash, a stew of lies, misinformation, and misinterpretation of facts, but the title was catchy; and, as I watched the first 2020 presidential “debate” Tuesday night, it kept popping up in my mind’s eye.

I put scare quotes around the word “debate” just the way I put scare quotes around the word “president” whenever I think about Trump. For an actual debate involves an interplay of ideas, an intellectual back-and-forth, a willingness and ability to develop logical lines of argument and calmly rebut, citing facts, the ideas put forth by one’s opponent. By definition it involves more than one participant, as well as a set of ground rules that mold the combatants’ interaction. These are the basic norms of debating that a child of 8 or 9 is taught by his or her debate coach. I should know—my son is a high school debater; before that he was an elementary school debater and a middle school debater.

Yet none of that was present Tuesday night. Or, rather, Biden showed up wearing his debater’s togs, but Trump, predictably, showed up with a bullhorn, a desperately swollen ego, and a slash-and-burn strategy that didn’t just shut down the ability to debate but did huge damage to the integrity of America’s political process. Faced with Trump’s storm of vitriol and repeated interruptions, moderator Chris Wallace was spectacularly unable to bring order to the stage. It was a colossal journalistic failure on his part, allowing Trump’s display of demagoguery and puffery, a sort of verbal version of mixed martial arts or World Wrestling Entertainment, to dominate the stage with his Noise in a way never before seen from a US president.

But he went far beyond just lying. Time and again he tried to sow doubt about the election process, about the basic democratic principle of settling political battles at the ballot box; and in the chilling final minutes, he made it clear that he was willing to send vigilantes to polling stations and attorneys to gum up every aspect of the vote count, all to secure his power.

In a country as on-edge and polarized as America is today, which has more guns than people, this was the height of irresponsibility. For that reason alone, this “debate” would have qualified as the most debased example of its kind in American history. But that wasn’t where things stopped. Where Trump really ended was in a sort of fascist halfway house, a strongman not quite confident enough in his ability to do away with the election process entirely, but secure enough in his bile to give a wink and nod to white nationalists and neo-Nazi street-fighters, and to salute one group by name, the Proud Boys, telling them to “stand back and stand by.”

That will surely go down as one of the most infamous lines in American politics—the moment when Trump put the world on notice that he was ready to activate his version of the Nazi SA paramilitary forces.

You reap what you sow. In acquitting earlier this year at his Senate trial a man whom they knew was guilty of a slew of crimes and outrages against the Constitution, Mitch McConnell’s Republicans gave their imprimatur to Trump’s dictatorial impulses. He is now running on those impulses, and he’s collapsing the country’s democratic pillars as he rampages. When the history books are written about this shameful period, those who enabled Trump’s onslaught against democracy will be condemned as collaborators.

Trump may not be guilty of treason according to the technical definition of the word. But I do know that what Trump is unleashing, in his increasingly desperate bid to retain power, and what the GOP congressional leadership is acquiescing in as they continue their Faustian bargain with him (“you give us conservative judicial nominations, and we’ll turn a blind eye to all your sins”), is something very, very dark. Something that could do unfathomable damage to US institutions and Americans’ lives. Something that could make peaceful politics, a politics bound by rules and norms and limits, a quaint legacy of a calmer past. For when the “president” of the United States uses his time in front of an audience of tens of millions to flirt with street gangs, to destroy public confidence in elections, and to refuse to agree to guarantees regarding the peaceful transfer of power, he is pushing a narrative of civil conflict. And that is something every person of good conscience, regardless of their ideological affiliations, should recoil from in horror.

Trump repeatedly said Tuesday night that he represented “law and order,” but from the start of what CNN’s Dana Bash labeled the “shit show” to the conclusion, his own words on the stage belied it. He is now quite openly flirting with violence as a means to prevent a full and fair vote count, and of unleashing fascist thugs to deal with his political enemies. That’s gangsterism—and that’s the Signal: The “president” of the United States is essentially seceding from the American constitutional system of governance. And yet from the GOP ranks in Congress, we still hear the clapping of the hired claque, or, just as telling, the silence of a cowed and cowardly gaggle.