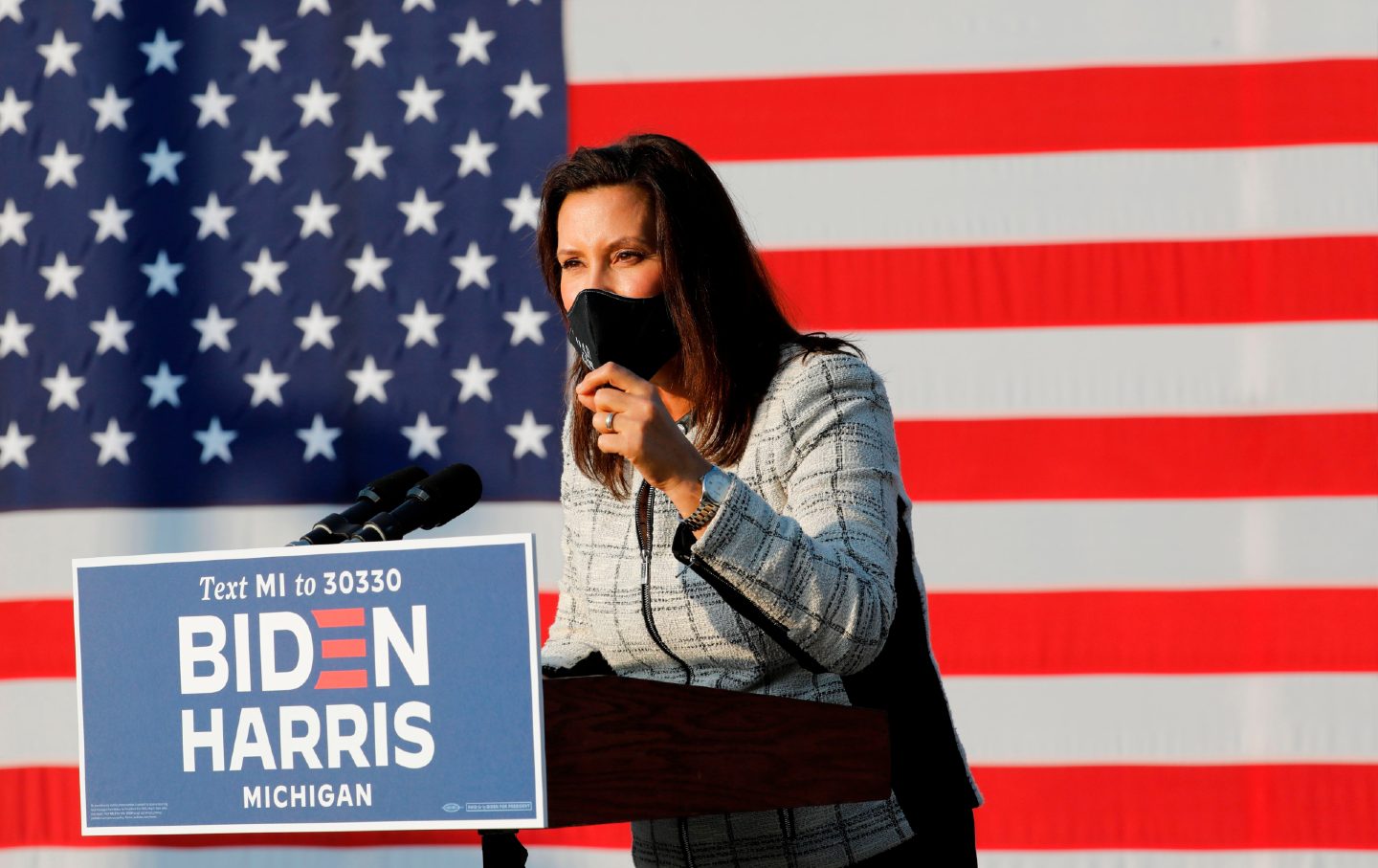 One hallmark of the Trump era is that incidents of terrorism are not followed by the traditional calls for national unity but often deepen the partisan divide. On Thursday, federal and state officials announced the arrest of 13 men in Michigan associated with a group called the Wolverine Watchmen on assorted charges of terrorism, conspiracy, and unlawful weapons possession. The most lurid of the accusations was that at least six of the men were involved in a plot to kidnap Michigan Governor Gretchen Whitmer.

The New York Times reported, “The men spied on Ms. Whitmer’s vacation home in August and September, even looking under a highway bridge for places they could place and detonate a bomb to distract the authorities, the F.B.I. said. They indicated that they wanted to take Ms. Whitmer hostage before the election in November, and one man said they should take her to a ‘secure location’ in Wisconsin for a ‘trial,’ Richard J. Trask II, an F.B.I. special agent, said in the criminal complaint.”

Part of the motivation for the alleged plot seems to be anger at Whitmer for locking down the state as a response to the pandemic. Evidence from social media indicates that members of the group have taken inspiration from Donald Trump’s presidency, including the support he’s given to anti-lockdown protesters. On April 16, approximately 3,000 protesters, many of them armed, gathered in the state capital to protest against Whitmer. The following day, Trump tweeted, “LIBERATE MICHIGAN!” There were further protests at the capital, with at least two of the arrested men participating in an armed protest on April 30.

According to NBC News, one of the arrested men, Barry Croft, in 2016 “pushed pro-Trump conspiracy theories that absolved Russia of meddling in the 2016 election, calling investigations of Trump an ‘uprising.’” Another arrested man, Pete Musico, “had a YouTube channel on which he railed against Whitmer and praised Trump.”

As Politico correspondent Tim Alberta noted, “If the president read his intel briefings and understood the dogma of white nationalist groups, he’d realize that language like ‘LIBERATE MICHIGAN!’ is read as tacit permission—if not explicit encouragement—for militias to take action.”

This was the argument that Whitmer herself took up in a press conference discussing the plot against her. “Just last week, the president of the United States stood before the American people and refused to condemn white supremacists and hate groups like these two Michigan militia groups,” Whitmer said. Speaking on CNN, Michigan Attorney General Dana Nessel made a similar claim. “We can no longer afford in this nation to have our elected leaders like the President… sending not just winks and nods,” Nassel said. “It’s not a dog whistle… it’s literally a command to action for domestic terrorists.”

In a series of tweets, Trump strongly rejected the idea that he had helped foster domestic terrorism. But in doing so, he reiterated the “liberate Michigan” rhetoric that is the crucial link between his politics and that of the Wolverine Watchmen.

Trump tweeted, “Governor Whitmer of Michigan has done a terrible job. She locked down her state for everyone, except her husband’s boating activities. The Federal Government provided tremendous help to the Great People of Michigan. My Justice Department and Federal Law Enforcement announced today that they foiled a dangerous plot against the Governor of Michigan. Rather than say thank you, she calls me a White Supremacist—while Biden and Democrats refuse to condemn Antifa, Anarchists, Looters and Mobs that burn down Democrat run cities. I do not tolerate ANY extreme violence. Defending ALL Americans, even those who oppose and attack me, is what I will always do as your President! Governor Whitmer—open up your state, open up your schools, and open up your churches!”

Speaking to Fox News, Trump campaign official Jason Miller also expressed anger at Whitmer, saying, “If we want to talk about hatred, then Gov. Whitmer, go look in the mirror—the fact that she wakes up everyday with such hatred in her heart for President Trump.”

Tacit approval of right-wing domestic terrorism has been a running theme of Trump’s presidency, going from the notorious “very fine people on both sides” remark after the Charlottesville white-supremacist rally to his comment during the first presidential debate of 2020 that the group called the Proud Boys need to “stand down and stand by.”

Trump’s response to the news about the alleged plot against Whitmer follows the same pattern he has always used: deflection by reference to alleged left-wing violence and an insistence on the legitimacy of the goals advocated by the terrorists. That is what he’s doing with his attack on Whitmer.

The logical inference one can draw is that Trump sees right-wing terrorists as part of his political coalition—and he doesn’t want to offend them. This was the explanation that a leading Trump supporter, former senator Rick Santorum, gave to explain Trump’s “stand back and stand by” comment, which was made in response to a question from debate moderator Chris Wallace.

“The Democrats owe a lot to Chris Wallace, because Chris Wallace asked those two questions, not Joe Biden,” Santorum noted in a CNN panel. “And he asked them for a reason. Because he asked two questions, where he was asking the president to do something he knows the president doesn’t like to do. Which is say something bad about people who support him. Talking about the white supremacists.”

So long as Trump sees violent right-wing groups as being part of his constituency, he will be unwilling to make a full-throated, unambiguous condemnation of them. America’s domestic terrorism problem is also a Trump problem.