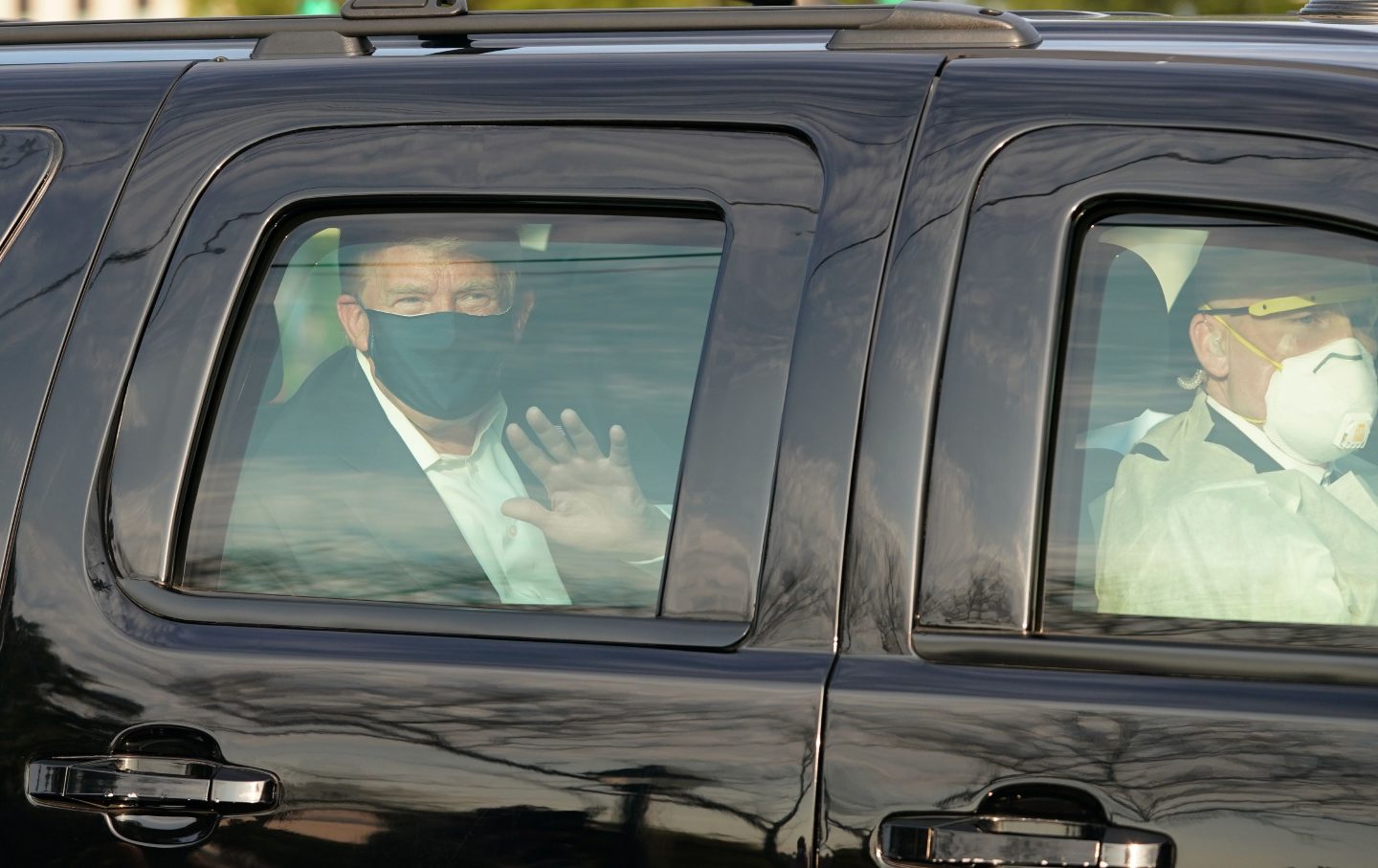 President Trump waves from the back of a car in a motorcade outside of Walter Reed Medical Center on October 4, 2020. (Alex Edelman / AFP via Getty Images)

The Trump campaign had a plan for the last month of the presidential race: It would highlight the contrast between the two candidates on Covid-19, calling attention to the stark differences between Trump’s confidence that the pandemic has been largely conquered and Joe Biden’s alleged fearmongering. This strategy has become considerably more difficult to execute after Trump tested positive for Covid-19 on Thursday evening and was hospitalized at Walter Reed Army Medical Center the following day.

As Axios reports, “Trump campaign officials privately admit that his diagnosis has blown up many of their plans in the sprint to November. The Trump campaign was planning to zero in on its ‘Biden’s hiding in the basement’ rhetoric for the rest of the month and draw a sharp contrast between the energy seen at Trump’s massive rallies and the slimmer crowds at Biden’s events. Trump was planning to hold campaign rallies and hobnob with donors in battleground states for the majority of October.”

This underlying premise of this strategy is that Trump, unlike Biden, is a robust road warrior, eager to rally his base and glad-hand GOP donors. Enthusiasm and energy would close the polling advantage Biden has enjoyed throughout the race.

Now hospitalized and likely to be in quarantine for at least another two weeks, Trump obviously can’t headline rallies. Nor does the message that the pandemic is waning seem credible.

In response to the new situation, Trump has recast his message. On Sunday, he tweeted out a video where he claimed that fighting Covid has given him new insights. “It’s been a very interesting journey,” Trump said. “I learned a lot about Covid. I learned it by really going to school. This is the real school. This isn’t the let’s-read-the-books school. And I get it. And I understand it. And it’s a very interesting thing and I’m going to be letting you know about it.” Bizarrely, Trump ended the video by saying, “We love what’s happening.”

The video was surely a testament to Trump’s enduring commitment to the power of positive thinking, a credo he inherited from the Presbyterian minister Norman Vincent Peale, who preached in Trump’s family church when the president was young.

Turning a Covid infection into a positive learning experience is very much in character for Trump. It’s the type of rhetoric that is likely to appeal to Trump’s most ardent supporters. The cartoonist Scott Adams, creator of the comic strip Dilbert and an outspoken Trump admirer, compared the president to Peter Parker, the alter-ego of Spider-Man. “Trump getting COVID-19 might turn out like Peter Parker getting bit by a radioactive spider,” Adams tweeted. “On paper, it sounds bad. But consider that he is now the candidate with the most empathy for the pandemic risk, whether he wanted it or not.”

But, Scott Adams and his ilk aside, few are likely to buy the idea that Trump has had a sudden epiphany about Covid. On Sunday, ABC News reported that a poll it had conducted with Ipsos showed that “in two separate questions, an identical 72% said that Trump did not take the ‘risk of contracting the virus seriously enough,’ nor ‘the appropriate precautions when it came to his personal health.’”

These numbers are unlikely to change, because Trump’s handling of his own personal health crisis has been a microcosm of his administration’s bungling of the pandemic. In both the general crisis and the personal infection, Trump has displayed science denial, misinformation, contempt for ordinary health rules, and a willingness to sacrifice sound policy for political theater.

It’s characteristic that the Trump White House has consistently obfuscated about Trump’s condition. As The Washington Post reported on Sunday, “The White House continued to provide limited and contradictory information about President Trump’s health on Sunday, saying that he had begun a steroid treatment after twice suffering bouts of low oxygen but also contending that he was doing well and could soon be discharged from the hospital where he is being treated for the novel coronavirus.”

The newspaper added, “The episode continued what has been a days-long torrent of falsehoods, obfuscation, evasion, misdirection and imprecision from those surrounding Trump as he faces the greatest threat to a president’s health in decades. From the chief White House doctor to the president’s chief of staff, the inability to provide clear, direct and consistent information about Trump’s condition has been widespread since the coronavirus began rapidly circulating in the West Wing.”

Trump’s behavior continues to be a danger not just to himself but also to those around him, including medical staff, Secret Service agents, and White House personnel. On Sunday, Trump went on a joyride in an armored Chevrolet Suburban as a way to greet supporters outside Walter Reed.

The joyride is indefensible on any medical grounds. As Dr. James P. Phillips, an attending physician at Walter Reed, tweeted, “Every single person in the vehicle during that completely unnecessary Presidential ‘drive-by’ just now has to be quarantined for 14 days. They might get sick. They may die. For political theater. Commanded by Trump to put their lives at risk for theater. This is insanity.”

It’s evident from Trump’s contradictory remarks and actions on Sunday that he is torn between two conflicting imperatives. On the one hand, he understands the necessity of saying that he has learned a lesson from his ailment and will do better in the future. But he also retains all the recklessness that contributed to his earlier bad policies and continues the behavior that likely led to his infection. This brazenness isn’t just a matter of personality but a direct product of his political persona. To his followers, Trump embodies manly toughness. Real men, by Trump’s reactionary ideas of gender identity, don’t like wearing masks, nor do they show weakness by obeying health care protocols.

Trump has learned nothing from his bout of Covid-19. Nor should we expect him to. Being sick doesn’t make you a doctor. If there is any education to be had, it might take place on a more general level, with voters drawing the proper conclusions about the link between Trump’s actions and his testing positive for Covid.