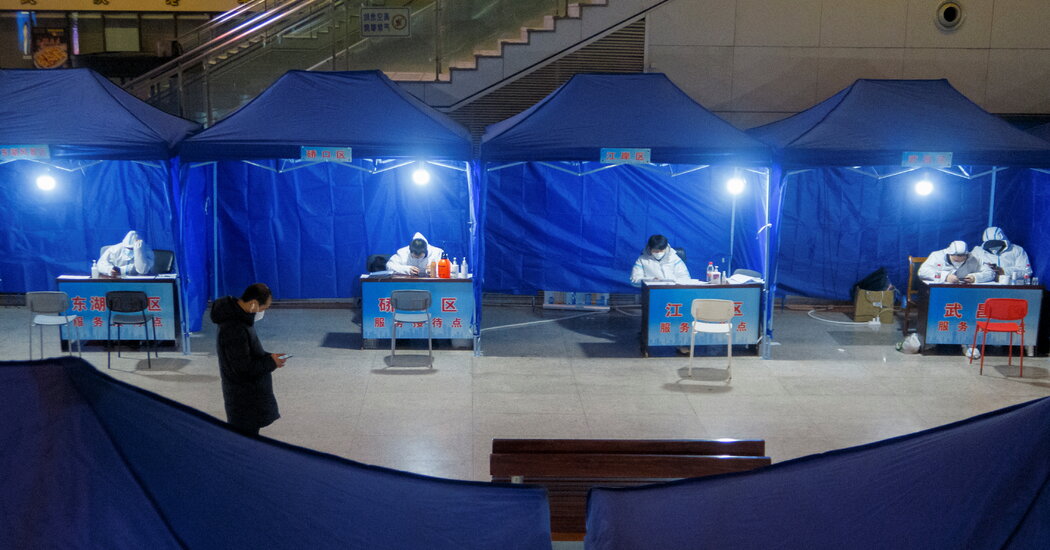 More than a year after a new coronavirus first emerged in China, a team of experts from the World Health Organization finally arrived on Thursday in the central city of Wuhan to begin hunting for its source, Chinese state media reported.

The investigation by the team of 10 scientists is a critical step in understanding how the virus jumped to humans from animals so that another pandemic can be avoided. Getting answers will most likely be difficult.

The Chinese government, notoriously wary of outside scrutiny, has repeatedly impeded the arrival of the team — and the investigation. Even in the best of circumstances, a full inquiry could take months, if not longer. The team must also navigate attempts by China to politicize the inquiry.

Here’s what to know about the investigation.

China set up hurdles and pushed for control.

Seemingly worried about drawing renewed attention to the country’s early mistakes in handling the pandemic, Chinese officials have used a variety of tactics over the past year to hinder the W.H.O. investigation.

After resisting demands from other nations that it allow independent investigators onto its soil to study the origin of the pathogen, China finally let two W.H.O. experts visit in July to lay the groundwork. Then it promptly placed the team into quarantine for 14 days, forcing its members to do some of their detective work from a distance.

They were not permitted to visit Wuhan, where the virus first emerged.

For months, China delayed approving a visit by a full team of experts, frustrating the health agency’s leaders. When the visit seemed to be finalized earlier this month, it fell apart at the last minute when Beijing failed to provide visas for the visitors, according to the health agency. Dr. Tedros Adhanom Ghebreyesus, the World Health Organization’s director general, issued a rare rebuke of Beijing at a news conference, saying he was “very disappointed” by the delays.

The Chinese government has demanded that Chinese scientists oversee important parts of the inquiry. It has limited the global health agency’s access to important research and data. The full W.H.O. team will be required to undergo two weeks of quarantine in Wuhan before it can begin sleuthing.

Critics say Beijing’s desire for control means the inquiry will most likely be more political than scientific.

“You want this investigation to be thorough, not subject to politicization, independent and transparent,” said Yanzhong Huang, senior fellow for global health at the Council on Foreign Relations. “But we have to be realistic.”

Despite the troubles, the W.H.O. says it intends to conduct a rigorous and transparent study.

“W.H.O. has been committed to investigating the virus origins from the outset,” Tarik Jašarević, a spokesman for the agency, said in a statement. “We ask all countries to support these efforts by demonstrating openness and transparency.”

Tracing the virus will be a painstaking task.

The team that arrived in Wuhan, according to the official broadcaster CGTN, will face a city radically transformed from when the virus first emerged, in late 2019. The city that went into lockdown on Jan. 23 last year and became a symbol of the virus’s devastation has been held up by Chinese officials a year later as a success story in vanquishing the virus — a city reborn.

The W.H.O. experts have decades of experience plumbing the depths of viruses, animal health and disease control. They come from Britain, Germany, Japan, Russia, the United States and other countries. Peter Daszak, a British disease ecologist, and Hung Nguyen, a Vietnamese scientist who studies zoonotic diseases, are among the team members.

But tracing the source of the virus that has killed almost two million people worldwide and infected more than 92 million as of Thursday will be painstaking. While experts believe the virus originated naturally in animals, possibly bats, little else is known.

The team is expected to examine the earliest reported cases of the virus in China, most likely scrutinizing data from samples collected at a sprawling wet market in Wuhan that sold game meat and live animals. Many of the first reported infections were traced there.

How much access the team gets in China will be critical, public health experts say.

They should be able to review all the data collected by China’s Center for Disease Control on the outbreak, “including contact tracing, environmental sampling, genetic sequences and identification of patient zero,” said Raina MacIntyre, head of the biosecurity program at the Kirby Institute of the University of New South Wales in Sydney, Australia. “It is important to do this comprehensively and transparently.”

The health agency has not said how long the inquiry will take, nor has it released a detailed itinerary for the team’s visit.

Marion Koopmans, a Dutch virologist on the W.H.O. team, said the investigation was a “long-term project.”

“We will put all the scientific information that has already been collected by our colleagues in China together and discuss, ‘What does that tell us?’” she said in a recent interview with CGTN, the Chinese international broadcaster. “Are there pieces of information that we would like to add? How could that be done?”

The team will have to sidestep attempts to politicize its inquiry.

The pandemic has hurt China’s reputation, with many foreign governments still angry that Beijing did not do more to contain the crisis in its earliest stages. So Chinese propagandists are trying to use the W.H.O. inquiry to help shore up China’s image and to portray the country as a mature superpower.

“China is open, frank and sincere,” Xinhua, the official news agency, said in a commentary on Wednesday about the investigation.

The W.H.O. itself has also been attacked by the Trump administration for seeming to bend to China’s will, even as the United States has faced criticism for its ineffective response to the pandemic. Before the team landed, Secretary of State Mike Pompeo said on Twitter on Tuesday: “The @WHO was corrupted by China’s influence, and bought cheap. WHO investigators still can’t access Wuhan — a year after the first cases were reported?”

That same day, Global Times, a state-run tabloid, wrote that the pending visit showed that China “has always been dedicated to making its contribution to the global fight against the pandemic with a transparent, responsible attitude, and a spirit of respect for science.”

The Chinese government has tried to push unfounded theories that the virus emerged outside China. Chinese scientists have suggested, without evidence, that packaged food from overseas may have brought the virus into China or that the pandemic could have started in India.

The heated political climate will make it difficult for the W.H.O. to carry out an independent investigation, experts say.

“The major concern here is the origin of the outbreak has been so politicized,” said Mr. Huang, the global health expert. “That has really narrowed the space for the W.H.O. to have an independent, objective and scientific investigation.”