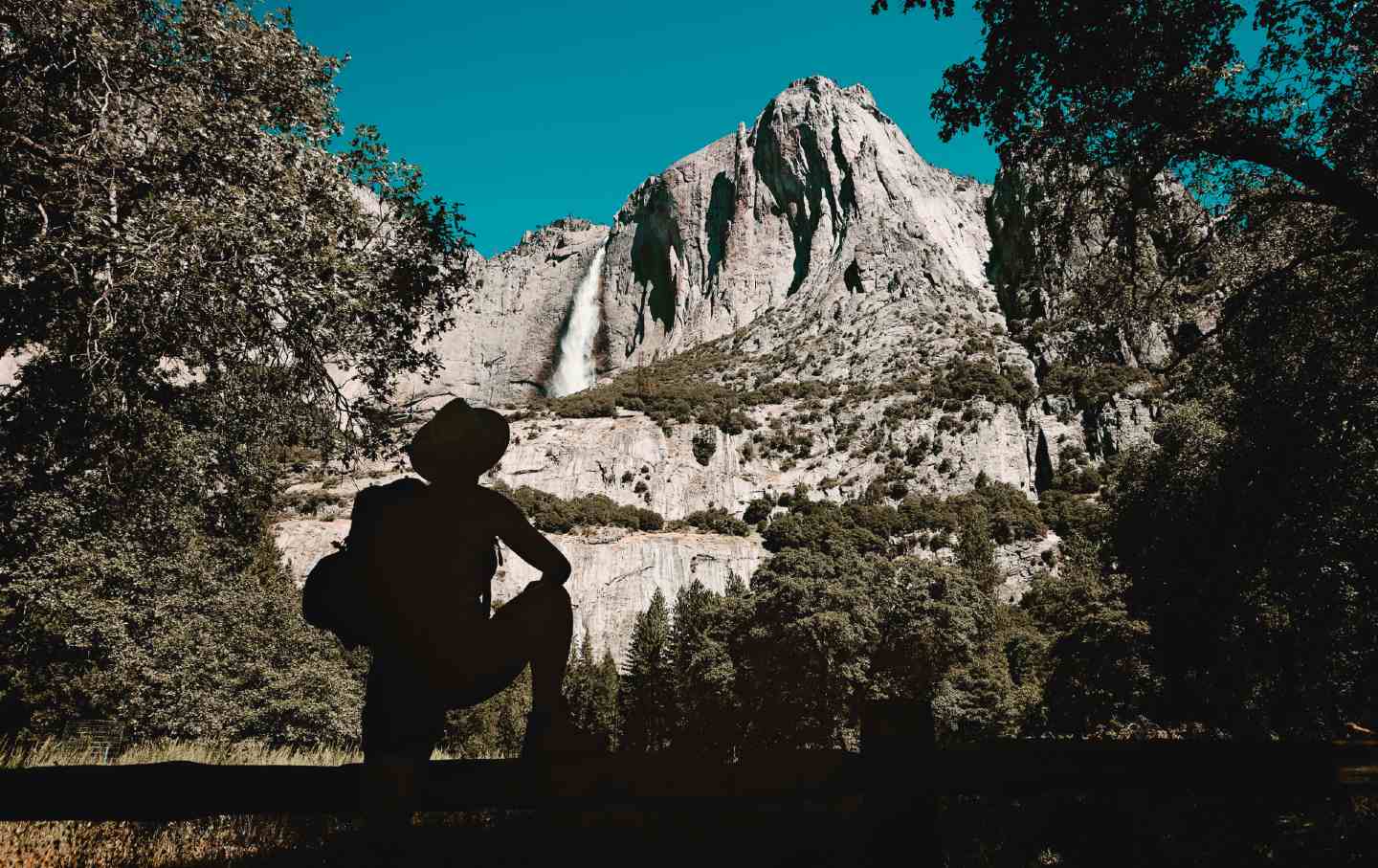 Even before anyone imagined a world in lockdown, getting a job in conservation was next to impossible.

First, the competition is fierce. And even if you get one, it’s usually short-term, seasonal, or an unpaid internship. Six-week programs are ideal for exciting students about conserving the environment, but the mounting climate change crisis requires a much more robust workforce.

Because, whether we are prepared to accept this reality or not, the world is rapidly changing. Conservation organizations are being stretched thin to keep pace with the influx of traffic in green spaces and the effects of climate change. These organizations have been saddled with a nearly endless backlog of maintenance projects, most of which have been deferred year after year by budget cuts.

These projects are crucial for climate change mitigation, a process meant to stabilize greenhouse gas levels so that the earth can adapt to the stress we inflict on it. We need healthy forests, prairies, and oceans—without them, we will never be able to avoid the 1.5°C rise in global temperature that scientists agree would increase the impact on climate from destructive to catastrophic.

And to make the earth healthy, we need knowledgeable, passionate stewards. But when most people can’t afford to pursue a career in conservation, we’re left with a short supply of scientists, educators, laborers, and policy advocates who are focused on protecting biological diversity, preserving habitats, and mitigating climate change. Plus, those in that small number tend to come from the same well-off backgrounds.

I’ve seen it myself. This summer, after graduating from college, I worked on two conservation crews—my fifth in total. I formed some of my closest friendships and fondest memories on these crews, and I saw how precarious a career it can be. Seasonal crews have a set end date: You start in the summer; come fall, you’re replaced with a new roster. Everyone is painfully aware of the invisible timer running out, until your group of colleagues has to splinter in a dozen different directions, all of us trying to figure out our next gig.

But it made no sense to work under this kind of scarcity: There were some days when we couldn’t see the sun in Illinois because of the wildfires 2,000 miles away in California. The earth was burning in front of our eyes, and we were scrambling to see how we could scrape together a career in conservation.

With the pandemic, it’s gotten even worse. It’s exacerbated the already existing problem of tight budgets, and opportunities to work in conservation have become even more scarce. City park districts, forest preserves, and public land agencies across the country have implemented hiring freezes and budget cuts for the year; nonprofits in general have been suffering from the economic downturn. Funding cuts and travel restrictions are preventing researchers from planning for the future. “When I am mentoring young people who want to work outdoors in this field, I have no real advice for how to make a living,” Alyssa Rooks, an environmental educator and former crew leader told me.

It’s a fairly agreed-upon condition of working in conservation, according to Teri Valenzuela, former Stewardship Program Associate at Audubon Great Lakes. “If you want to make it in conservation, it feels like you have to kill yourself trying,” she said.

Valenzuela, who until recently recruited for a restoration crew internship, said that the economic downturn has brought about a flood of new applicants looking for work. “People don’t realize how many applicants there are for these roles,” she said. She typically receives about 95 applicants for a spot on the crew; this year, she said, she received about 500. “The competition for conservation jobs has only been multiplied by the effects of the pandemic.”

Ten people were hired for that crew, but the other 490 were left to scour conservation job boards for the next position. “There aren’t positions that are readily available,” Valenzuela said. “Driving for Amazon is a position that is readily available. I have so many friends who are delivering packages.”

Meanwhile, the pandemic has left many yearning for green space. “There has been unprecedented use of forest preserves this year around the country,” said Alex Horvath, conservation corps program assistant at Friends of the Forest Preserves. Parks and forests have provided a space where it is safe to socially distance and exercise, but they need caretakers if they are to stay healthy.

Meanwhile, conservation organizations are strapped for money. According to Alice Brandon, resource programs manager for the Forest Preserves of Cook County, Ill., every year her organization goes through the complicated gymnastics of budget wrangling—moving money from one pot to another, just to make things run. And many conservation organizations rely on donations that constantly keep them in financial limbo, reliant on their donors’ continued generosity. Frequently, this results in creating a flashy number of short-term jobs at the expense of fewer stable jobs that people can live off of. Brandon said she could hire 150 high school kids for five weeks. For the same amount of money, she could pay six conservation corps crew members for a year, with benefits, a living wage, sick days, and PTO. “Which sounds more impressive to a funder?” Brandon said.

Luckily, we’re seeing politicians begin to take this dilemma seriously. In September, Senators Dick Durbin and Bobby Bush sponsored the RENEW Act. Inspired by the New Deal’s Civilian Conservation Corps and borrowing from the Green New Deal, it would put 1 million unemployed Americans over the age of 16 to work in conservation over five years across rural, suburban, and urban communities. The act is now in committee and will need support when it reaches the Senate and House floors.

Then, in late January, President Biden signed an executive order providing for the creation of a “Civilian Climate Corps,” also modeled on FDR’s CCC. It called for the secretaries of the interior and of agriculture and the heads of other relevant agencies to submit, within the next 90 days, a plan to thus “mobilize the next generation of conservation and resilience workers and maximize the creation of accessible training opportunities and good jobs.”

The pandemic has presented us with an opportunity to change our relationship to conservation in the United States, making stewardship an accessible and reliable career path. Taking care of our land shouldn’t be a luxury. We have to pry long-term, professional environmental opportunities out of the pockets of the rich. The Civilian Climate Corps would create millions of good, dependable jobs that restore and protect our threatened and fragile ecosystems, build resilience against climate change–related disasters, and prepare the United States for a green infrastructure.

But simply mobilizing a task force isn’t enough. The Green New Deal’s goals were designed to be rolled out over 10 years. We have workers who need jobs and conservation projects that need workers right now—yet we still have an impossible job market. Something is broken. And if we continue to delay, there is a serious risk of losing a generation of conservation workers to Amazon delivery jobs—after all, people need to support their families.

The original CCC provided 3 million workers with stable jobs. A 21st century conservation corps could be a lifeline for millions of workers, too. It is time to make conservation a funding priority. The Trump administration dismantled funding for climate initiatives and disrupted long-term climate goals. It made a mockery of efforts to protect natural resources; the 2021 Department of Interior budget marked a 16-percent cut from 2020, which was a 14-percent cut from the year before. Conservation has been treated as an auxiliary expense, and if we can’t see it in our overworked conservation organizations, then we should see it in the frustrations of potential conservation workers who cannot build a stable career.

What the future holds for conservation depends on structural policy changes and a shift in environmental consciousness. The Biden administration has a significant challenge and set of opportunities to breathe life into a sector that would be of critical help to the earth and the people living on it.