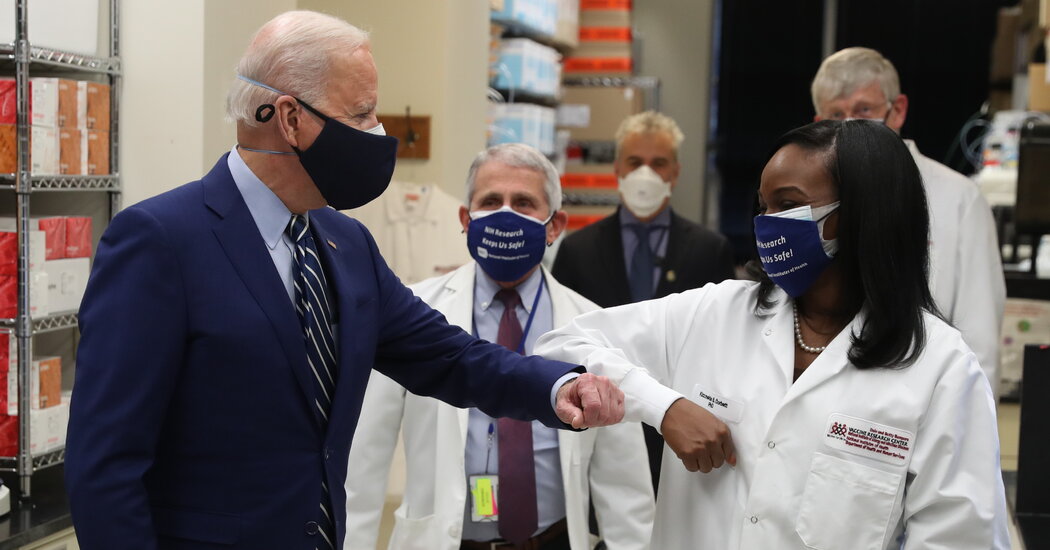 WASHINGTON — The Biden administration said Thursday it had secured 200 million more doses of coronavirus vaccines, enough to inoculate every American adult, but President Biden warned that logistical hurdles would most likely mean that many Americans will still not have been vaccinated by the end of the summer.

The additional doses amount to a 50 percent increase in vaccine, and will give the administration the number of doses that Mr. Biden said last month he needs to cover 300 million people by the end of the summer. But it will still be difficult to get those shots into people’s arms. Both vaccines are two-dose regimens, spaced three and four weeks apart. Mr. Biden lamented the “gigantic” logistical challenge he faces during an appearance at the National Institutes of Health. He also expressed open frustration with the previous administration.

The Department of Health and Human Services said Pfizer and Moderna would each provide 300 million doses by the end of July in “regular increments.”

The administration is looking toward a step-by-step process. Dr. Anthony S. Fauci, the government’s top infectious disease expert, predicted on Thursday morning that as early as April, any American could begin seeking a vaccine in an “open season” that would extend availability beyond priority categories.

“By the time we get to April, that will be what I would call, for better wording, ‘open season,’” Dr. Fauci said in an interview with NBC’s “Today.” “Namely, virtually everybody and anybody in any category could start to get vaccinated.”

But the issue might be getting doses to people who do not readily seek them.

Mr. Biden has carefully avoided having his White House become consumed in criticism of his predecessor, but on Thursday he took direct aim at Donald J. Trump for what he said was a failure to create a process for mass vaccinations. The president, who said he had promised to speak openly to Americans about the challenges of the pandemic, blamed Mr. Trump for creating a significant one by failing to oversee the creation of a streamlined vaccine distribution program. “The vaccine program was in much, much worse shape than my team and I anticipated,” Mr. Biden said.

“While scientists did their job in discovering vaccines in record time, my predecessor — I’ll be very blunt about it — did not do his job in getting ready for the massive challenge of vaccinating hundreds of millions,” Mr. Biden added.

Health officials in the Trump administration have pushed back on those suggestions, pointing to hundreds of briefings that officials at the Department of Health and Human Services offered the incoming health team, including on vaccine allocation and distribution.

The highly decentralized plans to distribute and administer the vaccines, giving state and local health departments authority once doses had been delivered, were developed with career staff members at the Centers for Disease Control and Prevention and the Defense Department.

Officials involved in the last administration’s distribution plans said late last year that outside of the first few weeks, when they carefully managed the flow of second-dose reserves, their plan was always to ship out doses as they became available, and that they never intended to stockpile doses.

The deal for 200 million additional doses of coronavirus vaccine helps fulfill a promise Mr. Biden made in January to ramp up supply to cover more of the population. He said then that the administration was closing in on that deal with the two manufacturers as part of his larger pledge that some 300 million Americans could receive a dose of the vaccine by the end of the summer or the beginning of the fall.

On Thursday, Mr. Biden said his administration had “now purchased enough vaccine to vaccinate all Americans.”

Dr. Nicole Lurie, who was the assistant health secretary for preparedness and response under President Barack Obama, said that vaccine hesitance could influence how soon some Americans eager to be vaccinated might get their shot, but that more supply would mean more work getting vaccines to people.

The government had already secured 400 million doses of the vaccines from Pfizer and Moderna, the two companies that have been approved for emergency distribution — doses that were expected by the end of June. Mr. Biden said on Thursday that the companies would now deliver them by the end of May.

A third manufacturer, Johnson & Johnson, has asked the Food and Drug Administration to authorize its single-dose vaccine for emergency use, a decision that could be made by the end of the month and allow the vaccine to be distributed the first week in March. But the company is still trying to show it can produce the vaccine at its Baltimore plant on a mass scale.

Federal officials have so far refused to say how much of that vaccine will be ready for distribution if it passes the regulatory hurdles, but they are cautioning not to expect a flood of new doses from Johnson & Johnson soon.

“We have not found that the level of manufacturing allows us to have as much vaccine as we think we need coming out of the gate,” Andy Slavitt, a senior White House pandemic adviser, said recently.

The pace of vaccinations has been steadily accelerating in recent weeks. The number of daily shots now averages about 1.5 million, up from 1.1 million two weeks ago. At that rate, Mr. Biden will easily fulfill his promise to vaccinate 100 million Americans in his first 100 days in office.

State and federal health officials say the main obstacle to vaccinating more people at this point is lack of supply. The administration has been searching for any possible way to speed up production, including one possible breakthrough in which Moderna would fill its vials with more doses, potentially getting millions more doses out sooner.

But Mr. Biden is facing a variety of longstanding manufacturing constraints, including limited open space across the globe for making more vaccines, and the delicate and complex nature of vaccine production.

White House officials have pointed to what they claim is their work increasing the weekly supply of vaccines by 28 percent. But those doses have resulted from an expected uptick in manufacturing.

Unlike the last administration, the White House pandemic team has been informing governors of projected supply in three-week increments, so state health departments will better know how to plan ahead.

And they have taken a much more aggressive approach in using federal resources to get shots in arms. The White House announced this week that it was standing up five new inoculation centers, including three in Texas and two in New York that are specifically aimed at vaccinating people of color. The administration also said that it would aim to ship one million doses of vaccine to 250 federally supported community health centers in underserved neighborhoods. A new federal pharmacy vaccination program began this week.

And on Friday, the administration announced that it was sending over 1,000 active-duty troops to Covid-19 vaccination centers across the country run by the Federal Emergency Management Agency.

FEMA, a part of the Department of Homeland Security, has said that it hopes to set up roughly 100 vaccine sites nationwide as early as this month and that it would spend $1 billion on vaccine measures, including community vaccination sites.

For Some Teens, It’s Been a Year of Anxiety and Trips to the E.R.

How Meaningful Is Prediabetes for Older Adults?

What is ‘extractive tourism’ and what can we do about it?

The term ‘overtourism’ has become the go-to expression to describe mass tourism, particularly for places underprepared for influxes of visitors.Facilitated largely by the advent...
View Post